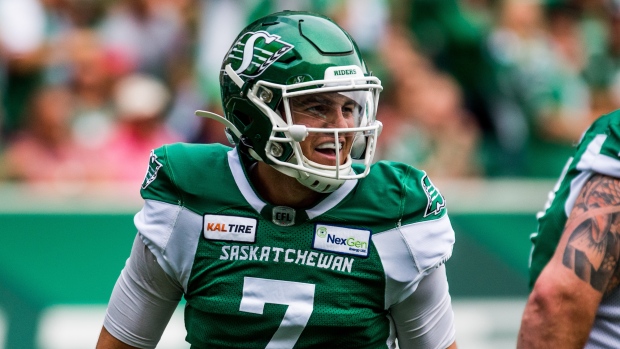 The biggest difference is the trips to the grocery store.

Back when Cody Fajardo was a third-string quarterback in Toronto or Vancouver, he could run into the store to grab a few items with no fear of being recognized and stopped for conversation with well-meaning strangers.

That’s not the case in Regina, where the Roughriders starting quarterback has taken the fanbase by storm, engaging them with his play on the field and his enthusiastic presence off it.

“I go in to get two or three things and I’m usually there about 30 minutes,” said Fajardo this week. “I don’t mind. It’s part of your platform of being a quarterback in a province that’s so passionate about football … I just plan for my grocery trips to take a little bit longer than normal.”

There was little to suggest a breakout season was coming for the 27-year-old Fajardo after he signed a one-year free-agent contract with the Roughriders in the off-season. The bulk of his duties through two seasons with the Argos and one with the Lions involved running short-yardage offence and practising mostly in the third-string role behind Ricky Ray and then Travis Lulay.

Headed into this season, Fajardo had just 43 career completions for less than 500 yards. That’s why many worried the Roughriders were in trouble when they were forced to turn to him after Zach Collaros was knocked out of the season’s opening game with a concussion and hasn’t played since. (Collaros was traded to Toronto in August).

As a result of limited opportunities through his first three seasons and his background at the University of Nevada as a running quarterback, few viewed him as a potential CFL starter capable of airing the ball with the best in the league.

“My college film definitely didn’t help with that because I was carrying the ball about 20 times a game,” Fajardo said. “I had a couple of games in college during my four years starting where I threw for 300 yards, but a typical game for me was 200 to 250 yards passing and about 100 yards rushing. So I think there was a little bit of a question mark in terms of what I could do as a passer and I think that led to a little bit of organizations not knowing if they could trust me to drop back.

“You just have to have the opportunity and get out into a game … early on in my career I leaned a little bit more on my mobility because I knew that was one of my strengths that got me into this league … I learned it’s not going to come right away. But naturally the more I learn about defences in the CFL and the more I learn about the offensive scheme, I feel more comfortable dropping back every down.”

In 12 games this season he’s completed more than 71 per cent of his passes for 2,862 yards with 10 touchdowns and seven interceptions. While scampering upfield is still a part of Fajardo’s game (70 carries for 396 yards), he believes he can continue to evolve into a quarterback who can throw the ball with the CFL’s best.

“There have been some games where I’ve had (fewer than 10 yards rushing) in a game and I think that goes to show the confidence I have in my arm now,” he said. “That’s the goal … as I get older and I continue to learn this game, taking off and running a little bit earlier is going to be out of my game plan.”

Signing a one-year deal looks like a stroke of genius by Fajardo, who would like to stay in Saskatchewan, where everything has fit just right this season.

The Roughriders apparently see it the same way.

“A couple of weeks go [GM Jeremy O’Day] reached out to my agent and there was a little bit of back and forth,” said Fajardo. “There hasn’t been any numbers talked but I love it here and it’s the first organization that’s given me an opportunity. I think that says a lot about how I feel and how I am comfortable-wise. This province has shown me a lot of love.”

The return of Pinball

Michael ‘Pinball’ Clemons has never been very far away from the Toronto Argonauts.

Besides being a team ambassador and a presence at most home games, he was asked by general manager Jim Popp to sit in on head coaching interviews last winter, before the hiring of Corey Chamblin.

But it was Argonaut team president Bill Manning who reached out to Clemons several weeks ago, asking him to take on advisory role with the coaching staff and have a greater presence around the team.

“I asked him to come on in an advisory role and kind of help us out a bit,” said Manning. “Here’s a guy who his motivational and positive nature is very infectious. I think sometimes lost in that is his football IQ. One of the things I asked is if he could help advise me but also be around the team and help support Corey … I asked him to help where he could.

“He at first was a little apprehensive because he didn’t want to step on any toes, but he did say that he missed being involved around the team … I do think over the last month or so he’s been able to be a very positive influence on the players and the coaches, and he’s pointing out some things that, as we go into next year, we can be a bit stronger.”

So the question becomes whether a more permanent role with the Argonauts is in Clemons’ future. That’s a difficult question to answer given that Toronto’s 2-10 record (and 6-24 over the past two seasons) could usher in a whole host of changes this coming off-season.

How Clemons might fit into that mix right now is difficult to say.

“How we left it was not really an elaborate plan, it was, hey, let’s kind of walk through this. I’ve asked for his help and his support and at the end of the season let’s see where things are and let’s see what works best for you,” Manning said.

It hardly came as a shock, but up until recently the Winnipeg Blue Bombers had been hopeful that quarterback Matt Nichols would return from his shoulder injury late this season.

But by this past weekend it became clear that wasn’t going to happen, so the decision was made to go under the knife on Thursday, ending his season and putting the Bombers’ hopes into the hands of Chris Streveler.

It also puts Nichols’ future into question, given that the 32-year-old is a pending free agent this off-season. Nichols was having a career season through eight-plus games, completing 71.3 per cent of his passes for 1,936 yards, with 15 touchdown passes and five interceptions.

So now what? Assuming Nichols can make a full recovery, he would seem to justify a contract in the neighbourhood of $500,000 per season, given the going rate for established veteran starting quarterbacks in the CFL.

But what if Streveler continues to evolve and takes Winnipeg to a Grey Cup? It’s long been a given that the Blue Bombers won’t be able to keep both pending free-agent quarterbacks.

Depending on how the rest of this season goes, it may be hard for them to make a case for spending more on a 33-year-old Nichols coming off shoulder surgery than a 25-year-old Streveler.

It’s not unlike the situation in Hamilton, where 31-year-old Jeremiah Masoli is gone for the year and remains unsigned for next season. The difference is that 25-year-old Dane Evans is signed through next season on a deal that pays him a base salary of roughly $100,000 plus playtime bonuses. It’s believed the Tiger-Cats want to retain Masoli and it’s reasonable to think that they could with so little committed to Evans.

The question both teams will have to answer: What’s the value of a veteran quarterback versus one who is still learning the CFL game?

Here’s a quick comparison, in each case excluding the games in which the permanent quarterback change was made due to injury:

It should make for some fascinating off-season decision making. For now, two teams intent on playing in the big game this November are in the hands of young quarterbacks who are still trying to prove their worth.

Stories of former players who wind up incarcerated in post-athletic life are always very sad.

But the story of former CFL defensive back Jonathan Hefney being sentenced this week to nine years in a South Carolina prison for trafficking cocaine is especially tragic, given the circumstances that led to his hardship.

Hefney was the CFL’s rookie of the year with Winnipeg in 2009, a former University of Tennessee standout who had a physicality and nose of the ball that made him among the CFL’s best.

While playing for Montreal in October of 2015 he suffered a serious injury, fracturing three vertebrae and suffering nerve damage in a game at Ottawa. At the time, CFL teams were only bound to cover medical costs for their players for up to one year. So when Hefney still needed procedures beyond the one-year mark, he was essentially on his own in the U.S. medical system.

He paid for a second surgery by raising money through a gofundme.com account, and was in need of a third.

Along the way, he became the cautionary tale of what can happen to American players who are injured playing in the CFL and must return to a country where they may not only be uninsured but also uninsurable because of pre-existing conditions suffered in football.

In fact, the example of Hefney was no small part of what helped the CFLPA extend injury recovery insurance for players from one year to two beginning this season, and to three years beginning in 2020.

It’s presumptive to suggest Hefney’s injuries suffered playing in the CFL led to dealing cocaine and his incarceration. But they certainly led to a debilitating physical condition, becoming uninsurable under the U.S. healthcare system, limiting his options for work and increasing financial pressure for medical expenses.