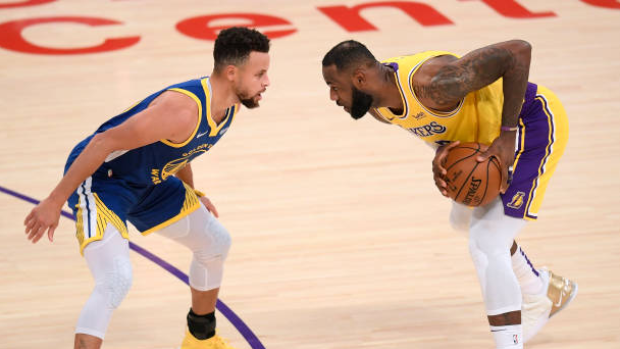 With nearly two months in the books for the NBA, most teams have established their identity for this season and given fans an idea of what to expect going forward.

The combination of trades, free agent adds, and injuries to open the year have created several ripple effects, leading to unexpected results.

Did anyone predict Chicago being in a tie for No. 1 seed in the Eastern Conference at this stage? Has Cleveland done enough to prove they’re a serious playoff contender? Are the Lakers actually a .500 team? Will we get the bubble or the play-in tournament version of the LeBron and AD show?

A quarter of the way in, we put together our list of all-star selections as of this date. We don’t care what’s happening between now and February. If the all-star game was tomorrow, who deserves the nod?

We list our selections below (two backcourt, three frontcourt starters) and break down some of the picks.

Bam Adebayo - Jimmy Butler is certainly an all-star, but should Bam be? At 14-11, the Heat are in the middle of the pack in the East, so I'm not sure why they deserve two players. Bam has a positive defensive impact on the Heat, as their 103.8 defensive rating with him on the court would rank second in the NBA. However, Miami's offensive rating of 105.9 when he plays would rank in the bottom third of the league, and their offensive rating is 10.2 points better when he's sitting. He's third on the team in scoring, and Miami hasn't won enough for him to justify a spot over other worthy players.

Rudy Gobert – He has a case to be an all-star. He's a top-two player on a Jazz team that's third in the West. He leads the league in rebounds and ranks second in blocked shots. To me, I feel the only other player he could replace is Draymond Green, but the Warriors have simply been too good to not have two representatives. Draymond's doing it across the board and is impacting winning even more than Gobert. Also working against Rudy is the fact that he's not very exciting to watch, especially in an all-star format. At the end of the day, fans want to be entertained, and quite frankly he doesn't provide that.

Joel Embiid – Games played was a significant part of the MVP debate last season and that will carry over into this article. How many games do you need to play to make an all-star team? I’m guessing Fabio benched Embiid because he missed nine games with COVID-19, but Butler has missed seven this season. Close enough? There are two main reasons I’d slot Embiid into the East starting unit. Firstly, ‘The Process’ has a significantly more pronounced impact on winning for Philadelphia. In those nine games Embiid missed, the Sixers went 2-7 with a -7.1 net rating, which was fourth worst during that time period. Secondly, beyond Embiid, there are no other true centres on the East roster. His size and abilities make him more valuable as opposed to sliding in another wing like Butler.

Draymond Green – I know Fabio has a bias towards winning teams deserving multiple all-star nods, but I blame that on the 2015 Atlanta Hawks and Kyle Korver. The All-Star Game is a compilation of the NBA’s best and most talented. So, while Draymond is the best defender on the best team, his overall production doesn’t measure up to Gobert who wrongly gets pegged as a boring pick. They’re neck and neck in DPOY pricing, but Draymond’s playmaking on offence is offset by Gobert’s rim-running, dunking, and rebounding. In a season where Gobert is averaging career highs in rebounding and field-goal percentage, the three-time DPOY winner would be a glaring omission.

LeBron James - I realize he’s only played in 12 games to this point, but his numbers are still legit when he's on the court: 25.6 points, 6.8 assists, 5.7 rebounds and 1.8 steals per game while shooting 47.5 per cent from the floor. More than that, he simply just deserves the benefit of the doubt at this stage of his career. He's an all-time legend and the event loses cache if he's not there. It's not necessarily fair, but that's how it goes sometimes.

Fred VanVleet – He’s carrying the Raptors, and the fact that Toronto is even close to .500 is mainly due to him. OG Anunoby and Pascal Siakam have both missed extended stretches of time, and the thought of the Raptors trying to survive without FVV is ugly. He leads the NBA in minutes at 38.1 per game, while averaging 19.8 points and 6.1 assists and shooting nearly 40 per cent from behind the arc. As per Cleaning the Glass, the Raptors have a +2.4 efficiency differential with him on the court, and that's +18.1 points per 100 possessions better than when he's on the bench. In terms of expected wins, Toronto plays like a 47-win team with him on the court. When he's sitting, they play like a 10-win team.

Ja Morant – I could end this blurb by simply telling you to watch some film. Yes, there continues to be room for improvement in his shooting, but of the 12 Western Conference all-stars, no one makes more ‘get-out-of-your-seat’ plays than Morant. In a year where most superstars have seen their scoring dip, the third-year guard is scoring five more points per game, with his 24.1 ppg being 15th best in the NBA. If he ends up missing multiple weeks, it could threaten his actual status come February, but for this exercise, he’s earned the right to attend his first All-Star Game.

DeMar DeRozan – Deebo hasn’t made the All-Star Game since his days with Toronto, but it wasn’t like he fell off a cliff during his time in San Antonio. Playing within Gregg Popovich’s system, his scoring dropped off, but he had career-highs in both field-goal and free-throw percentages. Joining this formidable Bulls team, his usage is back to Toronto levels and he’s scoring at will in the mid-range in a way no one else can in the NBA. His stats on their own should be enough, but the leadership he brings to this young core is further proof why he’s Chicago’s top all-star nod.

In addition to giving our picks, we decided to reach out to TSN’s Toronto Raptors producer Michael Hamarneh to weigh in with his all-star selections at the quarter mark. Here is a look at his picks.