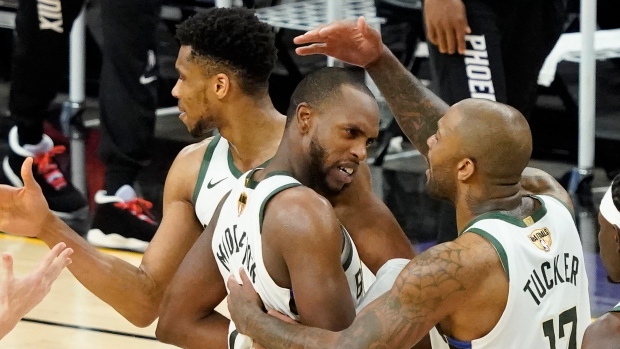 After dropping the opening two games of the NBA Finals, the Milwaukee Bucks have stormed back, taking three straight to grab a 3-2 series lead going into Game 6 on Tuesday night.

For the first time all series, the Bucks enter this game as the betting favourite to win the title at -425.

That number gives them an 80.95 per cent implied probability to win the franchise’s first championship since 1971.

Those odds are a stunning change from the 17.39 per cent implied odds they had when down 0-2 in the series.

Teams that have gone up 3-2 in the NBA Finals have won the series 81 per cent of the time.

The Bucks enter Game 6 as a five-point favourite.

Milwaukee has covered the spread in all three wins this series, including both games at home as a four-and-a-half-point favourite.

They enter this game 9-5 against the spread as a favourite in the playoffs, and after failing to cover at home in the opening game of the playoffs, the Bucks are covered seven of their past nine games on their home floor.

Meanwhile, the Suns enter this contest 6-4 ATS on the road in the playoffs. But Phoenix finds themselves in unfamiliar territory.

They dropped three straight games just once this season, and that came back in early January.

The over has hit in three of the five games this series, but all three of those came in Phoenix, with the two games in Milwaukee landing under the number.

We are less than 24 hours away from Game 6 of the NBA Finals. Milwaukee is currently a five-point favourite (-200 ML) versus Phoenix. The Bucks went from +135 to -400 to win the NBA championship following their Game 5 win. #NBAFinals https://t.co/uGE5Sl6izY pic.twitter.com/cOBMpCKCRv

For the first time all series we have two players who enter Game 6 with point totals of over 30.

Booker, for the second consecutive game, led all scorers with 40 points despite the Game 5 loss. He enters at +160 to be the game’s leading scorer with Antetokounmpo (+105) as the favourite.

Antetokounmpo and Booker are +475 to each score 35+ points, while Jrue Holiday and Deandre Ayton are +350 to both score 20+.

You can get +230 odds on him to record a double-double and the Bucks to win the game.