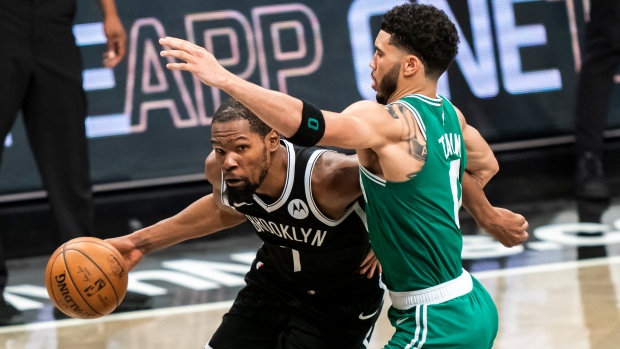 With three potential first-round sweeps on the horizon, Philadelphia, Brooklyn and Milwaukee are flexing their muscles as legitimate NBA championship contenders.

Ahead of Friday’s games, these are the current lines available for playoff series sweeps:

New York versus Atlanta has been the most entertaining series in the East but realistically both teams are still a season or two away from being title contenders.

One week into the playoffs, the East’s big three have demonstrated they’re in a class of their own and the odds to win the conference reflect that:

Look at that gulf. Vegas is saying it’s 10 times more likely the 76ers win the East than the Hawks or Knicks.

Here are some initial thoughts on their performances thus far and the strengths and weaknesses of their championship ambitions.

·       Kyrie Irving, James Harden and Kevin Durant only played eight games together in the regular season.
·       Ranked 22nd in regular season defensive rating.
·       One ball, five players on offence; having all that firepower is redundant.

Two games in, the concerns about Brooklyn’s defence looks overstated. Yes, a lot of the blame falls on Boston’s struggling offence but holding the second best defensive rating (103.1) over the first week just behind Milwaukee (93.2) is a good sign.

Rust and chemistry were inevitably going to be factors for Brooklyn but if you take away the first quarter of Game 1 where their big three shot 1-for-11 outside of the paint, they’ve combined to shoot 55 per cent from the field, 40 per cent from three and 95 per cent from the line. With the Nets getting hall of fame efficiency on more than half of their shot attempts, don’t be surprised if they score 100 points or more in every playoff game this year.

The biggest question mark moving forward? Figuring out Brooklyn’s fifth man in crunch time. Joe Harris has been dialed in, shooting 56 per cent from three and creating space for the offence but who can they rely on against bigs like Joel Embiid or Rudy Gobert? They’re currently running a three-man rotation of Blake Griffin, Jeff Green and Nicolas Claxton to man the five spot, but none of them grade as above-average rim protectors. Brooklyn is currently fourth in opponent points in the paint but that ranking will be tested when they face a more downhill offence like Milwaukee.

·       Getting knocked out before the NBA Finals two years in a row as the No. 1 seed, pundits have criticized this team for not being clutch.
·       A career 71.7 per cent free-throw shooter during the regular season, Giannis Antetokounmpo’s rate drops to 62.8 per cent in the playoffs.

This Milwaukee team looks very different compared to last year. Fundamentally they’re playing a similar brand of basketball but the supporting cast of players give them more flexibility on the offensive end.

Trading Eric Bledsoe for Jrue Holiday was a clear upgrade on paper but it still feels like Holiday’s contributions are being slept on. During the regular season, the Bucks went 5-8 with their point guard out of the lineup. In the minutes he’s been on the court, Milwaukee has a +6.4 net rating. When he’s off, that drops to +0.6. His on/off splits are second only behind Antetokounmpo.

The Bucks are also shooting three-pointers at a higher clip versus last season. They were 18th in the league last year at 35.5 per cent, this season they were fifth at 38.9 per cent. Holiday shot a career-high 39.2 clip from three while new additions Bobby Portis (47.1 per cent) and Bryn Forbes (45.2 per cent) ended the regular season as the third and fourth ranked three-point shooters in the league.

·       Will the rest of Philadelphia’s starting five be capable of exploiting their opponents when they double-team Joel Embiid?
·       96 per cent of Ben Simmons’ field-goal attempts were in the paint.

Of the three beasts in the east, the Sixers will be the hardest team to score on. They have two All-Defensive Team staples in Embiid and Simmons and had the league’s second best defensive rating, a fraction behind the Los Angeles Lakers.

Offensively they continue to lean on their strengths. Thus far through the playoffs, they rank first in points off post ups and are the top-ranked team scoring in transition. Over half of their team’s points have come in the paint and Simmons continues to get the rim at ease.

After shooting an abysmal 38.3 per cent in last year’s sweep by Boston, Tobias Harris has really upped his efficiency going 57.1 per cent from the field through their first two games. The key to Philadelphia’s playoff success lies in Harris’ ability to excel as their second-option on offence.

The winner of the Brooklyn-Milwaukee series will take home the Larry O’Brien Trophy.

While the Nets continue to heat up with more games played, catching them earlier in the playoffs is beneficial to the Bucks.

Defensively, Milwaukee has the most capable roster to match up against Brooklyn’s big three. Holiday might not get the DPOTY buzz he deserves, but he’s an on-ball menace having the speed, size, and IQ to limit his opponents. So long as the shooters can keep raining threes, they profile as the most dangerous two-way team in the NBA.

On the Brooklyn side, it’s not a stretch to say they have three of the league’s top 10 shot makers. The popular money has been on the Nets due to their raw talent but if you’ve been watching closely, their chemistry is building very fast. They consistently find the open man and break down the defence, leading to high-quality shot selection.

All the question marks lie on the defensive end but if they can stay organized as they have versus the Celtics, no team in the league can match up against their offensive upside.

Their upcoming series will be the marquee matchup of the 2020-21 playoffs.