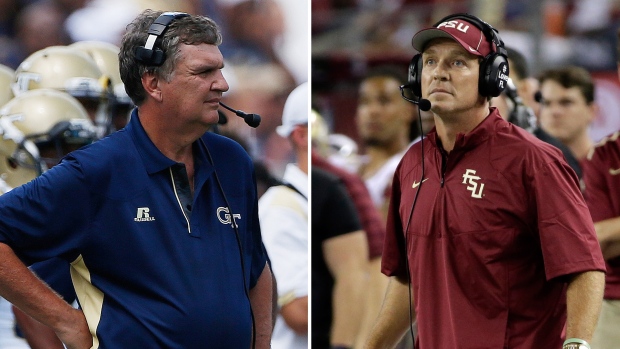 No. 11 Georgia Tech has final opportunity to knock out No. 4 Florida State in ACC Championship

No team has been questioned more in the College Football Playoff Rankings than Florida State.

The Seminoles have narrowly won their last three games, all against unranked opponents. As a result, Florida State was jumped this week in the CFP rankings by TCU.

The Yellow Jackets have reeled off five straight wins en route to the ACC championship, including wins over Clemson and Georgia over the past three weeks.

If Florida State can defeat Georgia Tech, their place in the first-ever College Football Playoff will be secure. A loss, however, will open the door for another team to jump into the top-four.

No. 5 Ohio State forced to turn to another new quarterback in Big Ten Championship

Ohio State sits just one spot out of the College Football Playoff, but to have any chance to reach the tournament, the Buckeyes will have to defeat the 13th-ranked Wisconsin Badgers.

The Buckeyes lost star quarterback J.T. Barrett to a broken ankle against Michigan last week and now turn to redshirt sophomore Cardale Jones under centre. A new signal caller is nothing new for Ohio State, the team was forced to turn to Barrett when Braxton Miller was lost for the season before the year started. 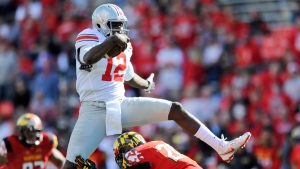 However, Jones will not have grace period Barrett did, instead he will get his first start of the season against the NCAA’s fourth-ranked defence in points allowed.

Look for Wisconsin to use a healthy dose of star running back Melvin Gordon as they try to be crowned Big 10 champions for the third time in four years.

No.6 Baylor out to add exclamation point as Big 12 season ends

The Baylor Bears have been outspoken on their desire to be in the College Football Playoff, even adding a public relations firm to advocate for them. The Bears can advocate for themselves this Saturday though with a win over ninth-ranked Kansas State.

Kansas State is unlikely to be able to reach the CFP, but with a win could clinch a share of the Big 12 title. Baylor would clinch that title outright with a win.