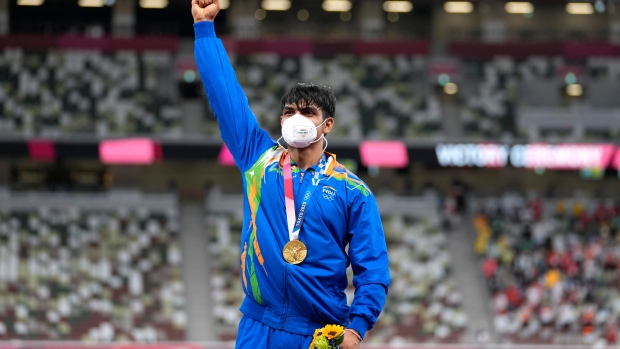 TOKYO (AP) — Neeraj Chopra won India’s first gold medal in Olympic track and field with a throw of 87.58 meters on Saturday to clinch the javelin title at the Tokyo Games.

India’s only previous medals in Olympic track and field were two silvers won by Norman Pritchard in the 200 meters and the 200-meter hurdles at the 1900 Paris Games.

Chopra was the first athlete from India to win gold in javelin at the Asian Games and the Commonwealth Games, both in 2018.

He set a new benchmark in Tokyo, holding off two athletes from the Czech Republic to finish atop the podium. Jakub Vadlejch took silver with a best mark of 86.67 meters and former world champion Vitezslav Vesely won bronze with 85.44.

Chopra pointed his index finger in the air to show who finished first, and draped India's flag over his shoulders to start the celebrations.

He was standing atop the podium about a half-hour later receiving his treasured medal.

India has won more gold medals in field hockey than any other nation, and the return of the men's team to the medal podium at the Tokyo Games — a bronze — after a 41-year drought prompted widespread celebrations.

A first gold medal in track and field will make Chopra a star in India.

Former world champion Johannes Vetter of Germany was favored to win but placed ninth after the first three attempts and was out of contention early. He had praise for Chopra.