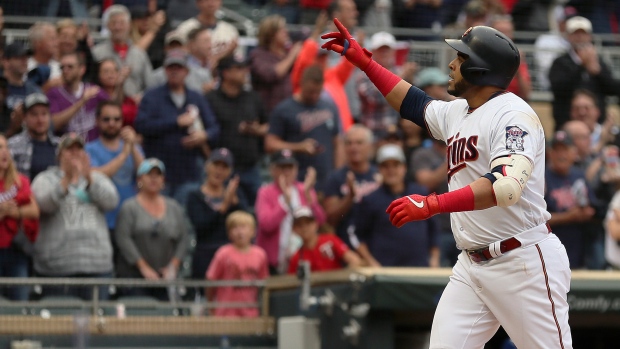 MINNEAPOLIS — When Nelson Cruz signed with the Minnesota Twins this past off-season, he made a few predictions. He was confident he would get to 400 career home runs this year, and he also believed the Twins would make the playoffs.

One down, one to go.

Minnesota piled up six runs in the first inning and rolled from there after starting the day with a four-game lead over Cleveland for first place in the AL Central.

Cruz became the 57th player with 400 homers. His fourth-inning solo shot was also his 40th homer of the season.

"It's nice to do it in front of the fans. I think they deserve it," Cruz said. "They've been such a big influence for us as a team. They come up every day with that energy."

Kansas City joined Baltimore, Detroit and Miami with 100 losses, only the second time in major league history there have been four 100-loss teams in one season. In 2002, Detroit, Milwaukee and Tampa Bay each lost 106 and Kansas City was defeated for the 100th time on the season's final day.

Cruz joined Harmon Killebrew and Brian Dozier as the only Twins to hit 40 homers in a season. He traded a baseball, a bat and a photo with the fan who caught his 400th home run in exchange for the milestone ball.

"Nelly going out there and hitting his 400th home run, maybe he picked the perfect day to do it," Twins manager Rocco Baldelli said. "We're all honoured to be here and witness it and enjoy this experience with him."

Sanó homered in the first and third innings. Sanó hit a three-run drive during the big first inning against starter Jorge López, who lasted just 2 1/3 innings.

Eddie Rosario and Marwin Gonzalez each drove in three runs for the Twins, who play their final six regular season games away from Target Field. Minnesota is 50-25 on the road.

Minnesota's Martin Perez had his shortest start of the year. The lefty allowed five runs and eight hits in 2 1/3 innings. Zack Littell (6-0) earned the win.

"To get to 200 hits, it's a huge accomplishment," Merrifield said. "It's a huge goal I've had. It's a blessing to have stayed healthy long enough to do it — that's a huge part of it, the durability."

The Twins' bullpen combined for 14 strikeouts in 6 2/3 innings.

TWINS ATTENDANCE UP IN 2019

An announced crowd of 31,628 fans attended Minnesota's final regular season home game. That brings the Twins' total attendance to 2,294,152 for the season, their highest total since 2013.

Royals: SS Adalberto Mondesi exited in the first inning with a left shoulder injury. Mondesi injured the shoulder while diving to make a play on a ground ball by Cruz. ... C Nick Dini left Sunday's game in the sixth inning with a right shoulder contusion.

Twins: C Mitch Garver was removed as a precaution from Sunday's game with right hip tightness. He'e considered day-to-day. ... RF Max Kepler (shoulder) will ramp up hitting activities in the coming days to prepare him to return to the lineup, including hitting off a high-velocity machine early in the week. ... INF Ehire Adrianza (oblique) went through an infield workout, and Baldelli said Adrianza "came out great" from it. However, Baldelli wasn't sure if Adrianza would return before the end of the regular season.

Royals: LHP Danny Duffy (6-6, 4.30 ERA) starts the first game of Kansas City's series with the Atlanta Braves on Tuesday. Duffy threw seven scoreless innings his last time out in a no-decision against Oakland.

Twins: RHP Jake Odorizzi (114-7, 3.59 ERA) opens Minnesota's series Tuesday at Detroit in search of his first win in the month of September.