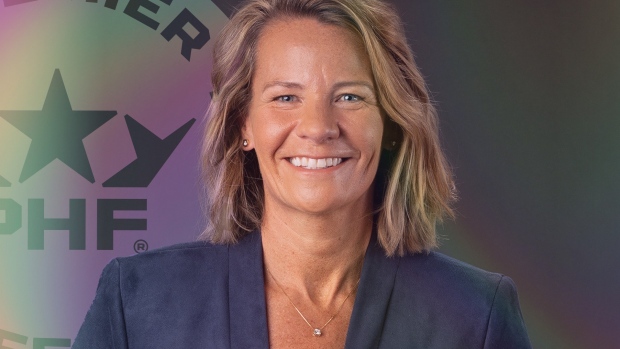 It would be an understatement to say the Premier Hockey Federation has undergone a lot of change over the past couple of seasons.

From a rebrand in September 2021 that moved on from the National Women’s Hockey League name, to the salary cap doubling to $750,000 (including full healthcare benefits for the players) for the 2022-23 season, to games being broadcast nationally in the U.S. and Canada, the league has hit a lot of milestones in a short amount of time.

On the leadership side, founder Dani Rylan Kearney stepped down as commissioner in October 2020 and was replaced by interim Tyler Tumminia. In February, Tumminia announced she would not be renewing her contract and would step down at the end of the 2021-22 season, paving the way for the league’s third commissioner in two years.

Now, she’s ready to lead the PHF into the future by capitalizing on the momentum the league has been riding.

“My experience with working at the pro level at the start of my career and having the exposure to different ways of doing it from the NBA and the NHL, I think that serves me well in this,” Carey told TSN.

“[I] had a lot of time in fan involvement and marketing as well as just sport development prior to my time at USA Hockey, so I think all of it really [leads] well into needing to understand a lot of aspects of the business and not just what’s happening on the ice.”

Officially starting on May 10, Carey’s initial work since being announced as the new commissioner has been primarily conversations with players, representatives, coaches, and alumni.

“My commitment is really about communication and transparency and making sure that it’s not just the initial few weeks where we’re having that dialogue, that it’s something that becomes part of our culture and that it’s consistent and ongoing so that we can tackle things in real time and make improvements and share where we’re headed,” said Carey.

One big move she has already made is the hiring of Melody Davidson as director of league and hockey operations.

Davidson most notably spent 26 years with Hockey Canada that included four Olympic gold medals and five Women’s World Championship titles. During her time with the program, she was in a variety of roles including stints as head coach, assistant coach, general manager, and head scout.

Per a PHF release, she will provide “general hockey operations guidance and support as it relates to the structure of the PHF regular season, playoffs, and off-season processes, and help develop and navigate the Federation’s relationships with key partners across the hockey community in North America and internationally.”

Having competed against Davidson at the international level while she was with USA Hockey, Carey also worked alongside her on the IIHF Women’s Committee and has seen firsthand what the Oyen, Alta. native is capable of.

“Seeing Mel’s dedication and her expertise in that area and the desire just to make sure this is a game that everybody can enjoy and do well in and compete hard it was really impressive to watch,” said Carey. “I have a ton of respect for Mel and certainly her credentials say it all.”

Now heading into its eighth season, the PHF is currently the only professional women’s hockey league in North America. Talks between the PHF and Professional Women’s Hockey Players Association initiated by the NHL regarding a potential merger reportedly broke down in April and the PWHPA is rumoured to be launching a league of their own for the upcoming season.

“Having more options, it’s what everybody wanted all along in giving players the opportunity to find a place to train and compete and showcase their elite skills,” said Carey on the idea of two professional women’s hockey league coexisting. “I’ll champion anyone who’s trying to improve that opportunity base and improve the game.

“Certainly, the PHF, my role is to make sure that this is the best home for women’s hockey, and that means providing just a reliable structure but also resources that continue to hopefully grow from where we are. It’s been a huge leap in the commitment in the recent season and our focus is trying to find ways to continue that momentum and not just in season eight but beyond.”

One of the hottest topics of this off-season for the PHF is expansion. The PHF is currently made up of six franchises, with the Toronto Six, Boston Pride, Metropolitan Riveters, Connecticut Whale, Buffalo Beauts and Minnesota Whitecaps. With a rumoured team in Montreal as well as another one in the United States, Carey says expansion is at the top of the list of things to figure out before the start of next season.

“The only thing I can say at the moment is it’s the highest priority because [of] the effect. Players need to make decisions about their next steps and where they want to play, their potential participation in the league,” said Carey. “But as you can imagine, the ripple effect of logistically to plan a season is critically important to get that answer for so many of us.”

As women’s professional sports continues to grow across North America, the PHF is far from the oldest league on the block. With the WNBA entering its 26th season and the NWSL starting its 10th, Carey looks forward to learning from others who have already walked that path with the potential of future collaboration.

“I think it’s going to be a real great community to be a part of and I’m certainly going to learn from those who are already doing it, the WNBA has been around a lot longer and have navigated these things,” said Carey.

“I’m learning some interesting stuff. The PHF, if you’re going to compare it to where we are in this timeframe and see if our league compares to some of the other leagues like the WNBA would’ve been, I think we’re making some strong advancements and moving quickly so hopefully we can be in good footing 10 years from now.”