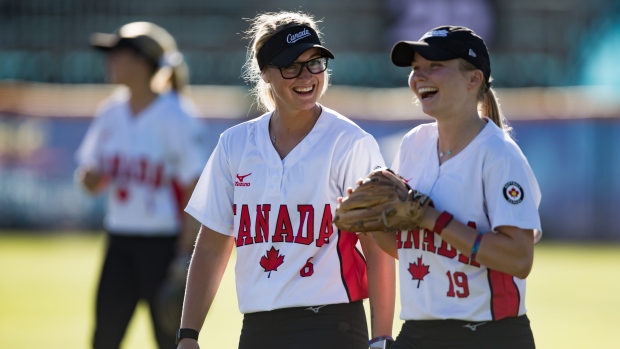 She'd sit in the stands at the annual Canada Cup tournament in Surrey, B.C., slightly in awe as athletes like Jenn Salling, Danielle Lawrie, Joey Lye and Kaleigh Rafter plied their craft on the field.

Now Entzminger is competing alongside those same athletes.

"They've been there for years. Not that they're old. But after looking up to them for years, it's cool being their teammates now," she said.

The 23-year-old infielder has mentioned to some of her teammates that she used to watch them play as a kid, but is careful about broaching the subject.

Entzminger isn't alone in her fandom. She's one of several up-and-coming talents on the national squad who are not only playing alongside their idols, but learning from them, too.

"I think they have a lot of influence on the players we are today," Entzminger said. "The coaching staff obviously helps a lot on our development, but I think we learn a lot through one another, whether we're the same age or looking up to girls who've just been around the game for a long time and they just have different knowledge."

Three of the women on the current roster went to the 2010 Beijing Olympics where Canada finished fourth.

Softball hasn't been included in the Olympics since, but that will change next summer in Tokyo. Canada is looking to punch its ticket to 2020 Games this week, playing at the Americas qualifying tournament in Surrey. The top two teams will lock up Olympic berths this weekend.

"They're always good at giving you a different perspective on things," the 23-year-old said. "They've been through a lot more situations at the international level and they're able to influence us and guide us through this."

Ranked No. 3 in the world going into the qualifying tournament, the Canadians dominated their first two outings, keeping both Cuba and Guatemala off the scoreboard.

Second baseman Kelsey Jenkins said the hot start shows how prepared and excited the team is.

"The last eight to 10 months have been all softball, all work," said the 22-year-old, who had a home run and three RBI sin Tuesday's 19-0 win over Guatemala.

"It didn't feel like we were pressing. It felt smooth, it felt natural. And I think that's what we wanted going into this week."

"I feel like the father of 15 daughters," he said. "It's nice to watch how the torch has been passed in a very sincere and supportive way from the older players to the younger players where they're nurturing and supporting and wanting the very best for them."

Sometimes what's best for a developing player and for the team is for a younger athlete to take more minutes on the field, he added, saying that the women who've been with the squad for years have embraced taking on different roles.

"A lot of times, my conversations with them are getting their perspective on things. I already know how I feel about how we're going to play a particular team or a particular pitcher we're going to face, but I'm curious about what they think," Smith said.

Those perspectives could be missing after next summer. Smith expects a third to half of the current roster to retire from softball after the Tokyo Games.

With the sport out of the 2024 Olympics in Paris, keeping momentum building for the future could be difficult, he said.

"You're going to have a group of younger players with international experience," Smith said. "But the question becomes whether they have the motivation to stick around for another eight years. And will life allow them to with careers and families and other things?"