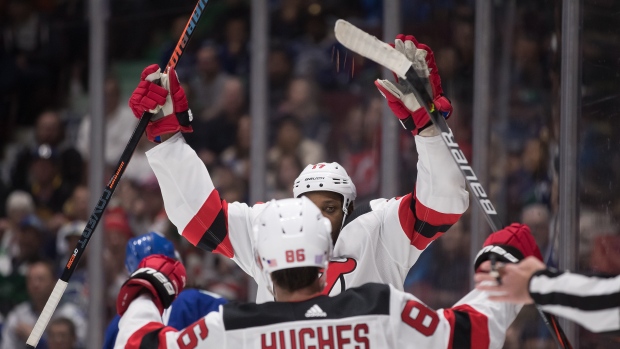 Wayne Simmonds, back, and Jack Hughes (86 , The Canadian Press

The New Jersey Devils scored goals 22 seconds apart in the first period then relied on a 30-save performance from Blackwood to beat the Canucks 2-1 Sunday afternoon.

In just his second NHL season Blackwood already has a 4-0-0 record against Vancouver and a .972 save percentage.

“I’m not really sure what it is, but I’ll take it,” said the Thunder Bay, Ont., native who the Devils took 42nd overall in the 2015 NHL draft. “I’m not going to overthink it too much.

“I just play like any other game and it just so happens that we’ve been pretty successful against this team. I’m just going to play them the same way every time and just hopefully get the results that we want every time.”

Early in the third period Blackwood stopped Vancouver’s Tanner Pearson on a rush, then watched as the rebound went wide of the net. Later he used his stick to steer a Brock Boeser blast wide.

Wayne Simmonds, on the power play, and Jesper Bratt scored for the Devils (5-7-4) who snapped a two-game losing skid.

“We struggled the last two games so coming back here tonight and taking the win, that’s huge for us,” said Blackwood, who improved his record to 5-3-3 this season. “We’re trying to gain some traction now.”

“He gave us saves when we needed them and that’s what you need,” said Hynes. “He looks good. He’s finding ways to win games and that’s exactly what you need from a goaltender.”

The Canucks are also 0-8-3 in their last 11 games against New Jersey.

Bo Horvat said the Canucks need to find an answer for the problem Blackwood has presented them.

“It seems like he is standing on his head every time he plays us,” said the Vancouver captain. “I don’t know if we’re his favourite team to play against, but you have to give him credit. He made some great saves out there”

The Canucks scored 45 goals in October but have managed just five in their last four games.

“Sometimes you score, sometimes you don’t,” said Canuck coach Travis Green. “We’re in a little rut right now. I know the last (few) games we haven’t scored. Our games look very similar. Analytically we haven’t tailed off in a lot of areas.

“When you are scoring you think you’ve got all the answers and you don’t. There’s not a magic recipe for scoring or you’d never get into a rut where you don’t score.”

Simmonds opened the scoring at 11:48 of the first period. Taylor Hall sent a pass into the Canucks zone that Kyle Palmieri directed to Simmonds, who put it past Markstrom.

It was just the second road power-play goal of the season for the Devils.

“I think you guys talk about it more than we do to be honest,” Simmonds told the media after the game. “I think we have been getting some pretty good looks, but unfortunately we haven’t been able to t put the puck in the net. Tonight we did.”

Bratt quickly made it 2-0 at 12:10 when he deflected a Damon Severson point shot into the net for his fourth goal of the season.

It was the second head-to-head brother clash between Vancouver’s Quinn Hughes, the 20-year-old defenceman picked seventh overall in the 2018 draft, and Jack Hughes, the 18-year-old centre picked No. 1 by the Devils in this year’s draft. In an Oct. 19 meeting Jack Hughes scored his first NHL goal in the Devils 1-0 win over the Canucks.

On Sunday, Quinn Hughes earned an assist on Boeser’s goal while Jack was kept off the scoresheet.

“It’s a lot of fun to play Quinn,” said Jack Hughes. “It’s the second time so it’s a little different. 2-0 against him, that’s pretty exciting.”

NOTES: Both teams were playing their third game in four days. …Adam Gaudette replaced Loui Eriksson in the Canucks’ lineup. … To support Hockey Fights Cancer the Canucks wore lavender warmup jerseys. … Prior to Simmonds’ goal the Devils’ power play was 1-for-25 on the road. … In their back-to-back losses to Calgary on Thursday and Edmonton Friday the Devils were outscored 9-2. … Vancouver’s Brandon Sutter played in his 701st career game. He is the sixth member of the Sutter family to play 700 or more games.