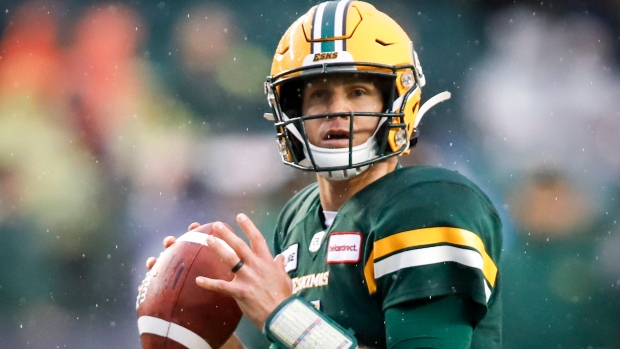 There's been a lot of change for the Edmonton Elks over the past year and a half: a new name, a new look and a raft of new faces on the field.

“We’ve got a great group of men in that locker room. We even cut some great men," he said as the Elks wrapped up training camp last week. "It starts with you as a person. If you have a great group of men and they happen to be really good football players, which is a great combination to have, that’s the starting point for building this thing the right way.”

Elizondo was handed the reigns to the team formerly known as the Edmonton Eskimos in February after Scott Milanovich stepped down from the head coaching role to become the quarterbacks coach for the NFL's Indianapolis Colts.

Elizondo's familiar with some of the Elks top talents, including starting quarterback Trevor Harris, who he worked with while serving as offensive coordinator for the Ottawa Redblacks from 2016-18.

Harris had a big season for Edmonton in 2019, finishing second in the league in passing with 4,027 yards, 16 TDs and six interceptions in 13 games.

Edmonton finished the regular season with a 8-10 record but clinched the crossover playoff spot and made it to the Eastern Conference final where they were clobbered 36-16 by the Hamilton Tiger-Cats.

Despite his success in 2019, Harris said he's remaining humble.

“I approach this camp the exact same way I approached my first training camp — I’m trying to make the football team. That’s what I want," he said.

While Harris made it onto the roster, some other big names did not.

Among the final cuts were linebacker Vontae Diggs — who had 73 defensive tackles, 11 special teams tackles, an interception and two sacks for Edmonton in 2019 — and defensive lineman Shawn Lemon.

Diggs went on to sign with the Toronto Argonauts and Lemon with the Calgary Stampeders.

“It was tougher this year than most because the competition had been so good across the board at a number of positions," Elizondo said. "There’s still a lot of competition there in that room, of those that made it.”

"I think the process is hard because you don’t know how they respond when the lights come on," Elizondo said. "Those pre-season games afford you that opportunity. Without those games, you just have to make those decisions based on what you saw on the field, what you saw in the scrimmage.”

Chemistry has already begun brewing between those players who did make the cut.

Harris and wide receiver Derel Walker gushed about one another to reporters on the final day of training camp, with the quarterback saying he'd first reached out to Walker several years ago with praise for his game.

"I’ve been watching Derel for a long time and hoping we could get him on the same team as us and here we are," Harris said, adding that he spoke to Elks general manager Brock Sunderland over the extended off-season about the possibility of bringing the native of Hillsboro, Texas back to Edmonton.

“I think he’s going to have some receptions this year. He’s different," Harris added. "I’m not sure I’ve had a (receiving) unit quite like this.”

Walker played four seasons for Edmonton before decamping to Toronto for the 2019 season. He had 1,040 receiving yards and six TDs in 15 games for the Argos.

Walker and Harris began chatting about a year ago and that relationship has continued to grow on the field.

“Don’t have to do to much when you have a guy who’s going to put the ball right there where you need to be. It makes it a little bit easier on me," Walker said. "So I’m just ready to develop a little more chemistry to see how things really pan out.”

The Elks first chance to truly test out the revamped receiving group will come Saturday when they host the Ottawa Redblacks to kick off the 2021 CFL season.

Preparing for the matchup put a giant smile on the face of Aaron Grymes this week. "This is like Christmas right here," said the defensive back, who returns to Edmonton after playing 2019 for the B.C. Lions.

"What more motivation do you need? No big speeches, no rah rah, no nothing. This is game week. We’ve been waiting on this for 18-plus months. So we’re here.”

2019: Clinched the crossover spot after finishing the regular season with a 8-10-0 record, then lost to the Hamilton Tiger-Cats in the Eastern Conference Final.