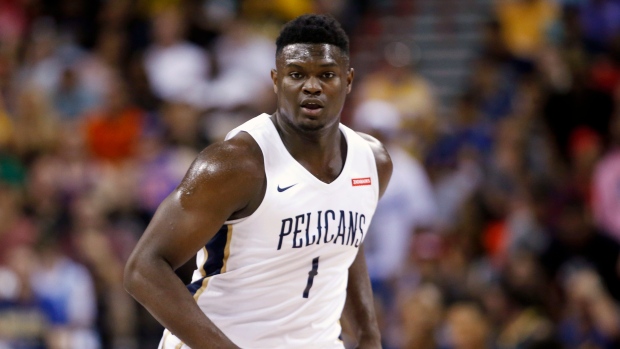 NEW ORLEANS — Zion Williamson will miss the start of the season after the No. 1 overall draft pick by the New Orleans Pelicans had right knee surgery, sidelining the hyped rookie for nearly two months.

Williamson had his torn right lateral meniscus repaired on Monday. The club says his recovery will last six to eight weeks.

The 19-year-old Williamson turned pro after one season in college, during which he averaged 22.6 points and was voted to the Atlantic Coast Conference's All-Defensive Team. He also averaged 8.9 rebounds, 2.1 steals and 1.8 blocked shots.

He was projected to start immediately at forward for New Orleans, alongside guards Lonzo Ball and Jrue Holiday, forward Brandon Ingram and centre Derrick Favours.

While it remains to be seen how coach Alvin Gentry will change his rotation in Williamson's absence, it appears 6-foot-9, 235-pound forward Nicolo Melli of Italy could be in line for more playing time.

Melli, who was acquired in the off-season, averaged 8.4 points and 5.4 rebounds this season.