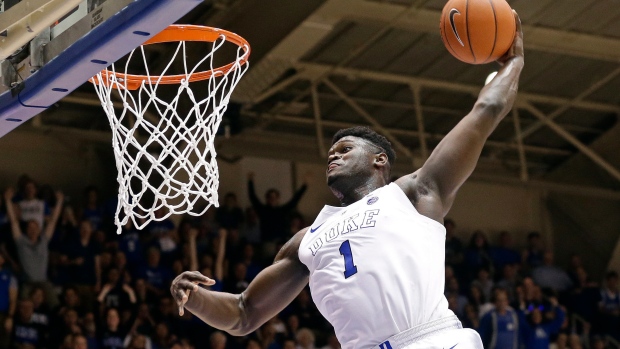 NEW ORLEANS — Now that six-time All-Star Anthony Davis' trade request has been honoured, it's time for the New Orleans Pelicans to start a new era by drafting the next face of the franchise.

Duke star Zion Williamson is widely seen as the top pro prospect to enter any NBA draft since Davis in 2012, and the Pelicans — thanks to an unlikely NBA draft lottery victory last month — have the right to select him first overall on Thursday night.

While new Pelicans executive vice-president of basketball operations David Griffin and coach Alvin Gentry have declined to announce their draft intentions, Gentry chuckled when describing the pressure to get the decision right as "Really very little. Minimal, OK? I think we'll make the right decision."

The ability to make that first pick this year "gives a boost to our franchise right away," Gentry said. "We're going to end up with a really good basketball player."

The Pelicans even posted a compilation of Williamson's Duke highlights on their official website.

The 6-foot-7, 285-pound Williamson was just the second freshman to be a consensus national player of the year, along with Kevin Durant with Texas in 2007. While Williamson has yet to exhibit consistent outside shooting, he has displayed a dominant mix of power, quickness and skill that has convinced scouts of his extraordinary promise as a pro.

He averaged 22.6 points per game at Duke and also was voted to the ACC's All-Defensive Team after averaging 8.9 rebounds, 2.12 steals and 1.8 blocked shots per game. He leaves Duke as the holder of several freshman records, including single-game scoring after his 35-point outburst against Syracuse in January.

And this draft could have enormous, long-term implications for New Orleans even beyond the addition of Williamson because of the bounty of first-round draft choices the Pelicans are to receive from the Los Angeles Lakers as part of the Davis deal .

The trade — which also sent a total of three first-round picks to the Pelicans — won't become official until after the new NBA league year begins July 6. But when the Lakers pick fourth overall, they will effectively select for the Pelicans and eventually will send that player to New Orleans — unless that pick is moved in a subsequent trade on behalf of the Pelicans by draft night. And while deciding whether to select Williamson isn't bound to cause any mental anguish or second guesses, deciding who to pick fourth overall could be a much tougher call.

Gentry noted that while most drafts have just a few elite prospects, there often are future stars mined from mid- to late-first-round picks — never mind a second top-five choice like New Orleans has acquired.

A handful of prospects stand out as possible fourth overall picks, and the position they play could be a factor.

The Davis trade brought New Orleans highly regarded small forward Brandon Ingram, point guard Lonzo Ball and shooting guard Josh Hart. Ball and Ingram would be presumed starters alongside veteran guard Jrue Holiday and Williamson at power forward. The only true centre on the roster is Jahlil Okafor. Forward Julius Randle also can play centre, but is essentially a free agent with a player option to return for next season. Christian Wood, a 6-10 forward who thrived in his short, late-season stint with the Pelicans, also could play centre.

Texas' Jaxson Hayes (6-11, 220) is widely seen as the top centre in the draft, but not necessarily a top-five talent, so free agency might be the more practical route for the Pelicans to pursue an upgrade there.

While none of them would be expected to start immediately, each could emerge as an increasingly prominent player in the rotation as the season wears on. And the ability to bring a reliable scorer, playmaker or defender off the bench could make all the difference if the Pelicans find themselves making a playoff push next March.