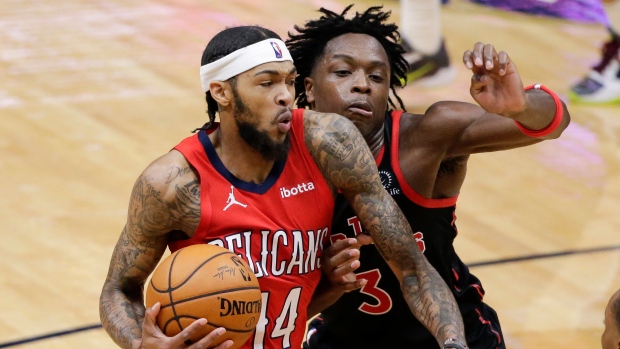 New Orleans Pelicans forward Brandon Ingram has been diagnosed with a left low ankle sprain and has been ruled out of Friday night's game in Philadelphia.

The Pelicans announced Ingram's status after a scan Wednesday confirmed the preliminary diagnosis he received when the injury occurred during Tuesday night's 108-103 victory over Golden State.

Ingram was hurt in the second quarter and tried to play through the pain until leaving the game for good in the latter portion of the third quarter, having scored 13 points.

The club says Ingram, who has averaged 23.8 points, 4.9 rebounds and 4.9 assists this season, will be day-to-day after Friday night's game against the 76ers.

The Pelicans, who have six regular-season games remaining, entered Wednesday two games behind San Antonio for the final Western Conference play-in spot, and three games behind both Memphis and Golden State.

New Orleans plays its next five games on the road before finishing the season at home against the defending champion Los Angeles Lakers.