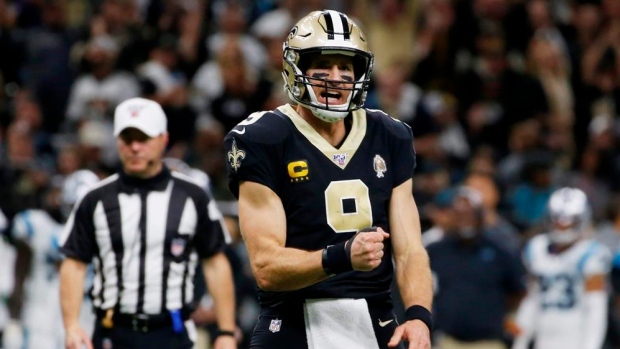 NEW ORLEANS — Drew Brees has a knack for making history when the only NFL game to watch is being played inside the Superdome.

There was the Sunday night in 2012 when Brees' 40-yard pass to Devery Henderson gave him touchdown passes in 48 straight games, eclipsing a mark set by Hall of Fame quarterback Johnny Unitas half a century earlier. That streak finally ended at 54 games — a mark which still stands.

Brees entered this weekend three touchdowns shy of breaking Manning's career touchdowns passing record of 539 as the Saints prepared to host one of Manning's former teams, the Indianapolis Colts, on Monday night.

New England's Tom Brady, with two touchdowns Sunday at Cincinnati, increased his career total to 538, one ahead of Brees.

Brees said he was more focused on winning and refining an offence that scored 46 points — albeit in a narrow loss — against San Francisco's highly rated defence a week earlier.

“Obviously, before the season you know you are a certain distance away, but then once the season starts, you just focus on winning games and doing what I need to do as a quarterback of this team to put us in the best position to succeed,” Brees said. “With that, I guess the statistics come, and maybe they add up, and then all of a sudden, you're close enough to be within striking distance of some of those things.”

For Brees, three touchdowns is striking distance. He had five against the 49ers in Week 14 — one of 90 career regular-season games in which he's had at least three TDs in his 19-year career.

The enduring success of the 40-year-old Brees, who now has 76,577 career yards passing, is “great for the game, ” said Colts coach Frank Reich, who played QB in the NFL for 13 years.

“I don’t always like going up against it,” Reich added. "I just think that he has really set the standard as far as accuracy. I don’t know Drew at all, but I just know a lot of people that do know him. His work ethic, I think that is why he is still playing at a high level at this age.”

To Colts defensive co-ordinator Matt Eberflus, Brees' longevity has become an element of what makes him so hard to scheme against. Eberflus figures that whatever coverage any team throws at the Saints, Brees has “definitely seen it,” and possesses the precision to attack it.

“There is no doubt," Eberflus said. "He’s an elite player at his position and he’s been that way because of his timing and his accuracy.”

Saints right tackle Ryan Ramczyk, who played in the Big Ten for Wisconsin, in his home state, was a few months short of turning 7 at the end of the 2000 college season, when Brees was a Heisman Trophy finalist and leading Purdue to the second of just two Rose Bowls in school history.

Around 17 years later, Ramczyk was a rookie at Saints practice, botching protections to the point that Brees was evidently irate. But Brees wasn't going to let his frustrated outburst become the rookie lineman's enduring memory from that day.

“I'm trying to figure all this stuff out, a ton of pressure,” Ramzcyk recalled. “After practice, he came up to me. ... He was there for me. He said, ‘If you have any questions, come to me. Let me know.'

“It was so genuine, so sincere, I was like, 'OK, this guy's got my back. He's looking out for us,'” Ramczyk added. “It's a great connection that he has with not only the (offensive) line but everyone on this team. We all trust him 100 per cent and he has a ton of trust in us.”

Now in his third NFL season, Ramczyk was able to celebrate Brees' yards passing record with him in 2018 and hopes to do the same soon for the all-time touchdowns mark, be it this week or later.

“This is a guy that I was watching growing up," Ramczyk said. “To be on his team is a pretty awesome thing.”

Same goes for Smith, who caught Brees' last touchdown pass last week and could very well be the target of the record breaker, only one season after his memorable TD catch on a long pass down the right sideline gave Brees the yardage record.

“That would be crazy if that happens," a grinning Smith said.

“As a second-year player here, it's wonderful to be around somebody who is just so great in everything they do and so precise, and being alongside of him helping him break records," Smith said. "I feel honoured just to be in his presence. Just a great guy in general. I'm just trying to take it in. I'm still in awe. I'm just here for the ride and having fun while doing it.”