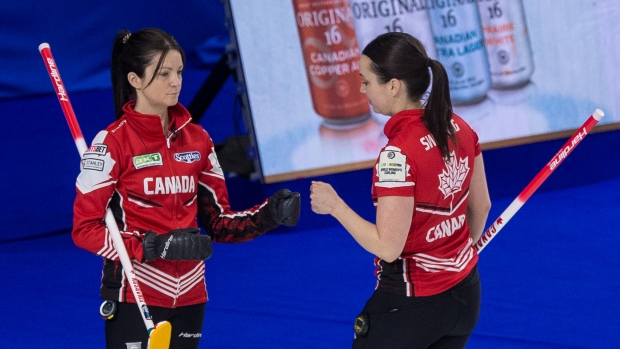 A memorable curling season essentially comes to a close this weekend ahead of a new quadrennial that will see some interesting changes on the domestic scene.

Most elite men's and women's teams will have new lineups next season and a few elite players are shifting focus to mixed doubles instead.

Jennifer Jones, Brad Gushue, Kevin Koe and Rachel Homan are just some of the top skips who will have new-look rinks in the 2022-23 campaign.

So what else will change? Could the residency rule get another tweak? Will national tournament formats be adjusted again? And when will Canada -- for years a mainstay at the top of the podium -- win another major international event?

Curling Canada is planning to complete its regular post-quadrennial high-performance review, said chief executive officer Katherine Henderson, adding it will include an internal review, engagement with external partners, a review with Own the Podium, an analytics breakdown, a look at training setups and more.

The calendar is also likely to be examined given the country's disappointing results at the most high-profile event of the four-year cycle: the Winter Olympics. There has been much criticism that dates for team trials (late November) and the cancelled mixed doubles trials (late December) were too close to the Games in February.

"It's really the diagnostic of the (review) results that would then dictate the date," Henderson said in a recent interview. "There's so many factors. It could be (adjusted) two weeks, it could be two months, it could be two years.

"But I think we need to go through the process of saying, 'How do we incrementally improve our program and what would that involve and then we would take those decisions based on that.'"

Gushue salvaged a bronze medal in the men's team event in Beijing but Jones missed the playoffs in the women's competition. Homan and John Morris didn't make the cut in mixed doubles.

Canada also missed out on gold at the men's and women's world championships. Gushue settled for silver in Las Vegas and Kerri Einarson took bronze in Prince George, B.C.

Canada's Mark Ideson earned bronze in wheelchair curling at the Paralympics while Marie Wright and Jamie Anseeuw missed the playoffs at the world wheelchair mixed doubles championship in Lohja, Finland.

So as Canada looks ahead to the 2026 Winter Games and Paralympics in Milan, Italy, there is plenty of work to be done.

Here are some other notable observations from the last campaign:

ROCK AND A HARD PLACE

Curling stone handles were an issue at some major championships. Rock malfunctions even occurred at the Olympics, with organizers deciding to remove the batteries and instead use the honour system for hog-line violations.

It might be time for the sport's powerbrokers to create a single easy-to-use hub for curling information. At present, the front of the World Curling Tour's homepage features news content from last summer. The WCT world ranking list doesn't include most of the sport's top teams. The WCF calendar only includes select events. In an age when sports fans are used to immediate access to results, bios, rankings and statistics -- especially with more gambling options now -- curling fans are forced to search harder for info. Independent websites are usually the landing point.

Curling is blessed with some of the best commentators, analysts and broadcasters going. However, the Olympic experience of multi-sheet coverage left viewers spoiled. Not all budgets are created equal of course. But surely the time has come for curling to follow the lead of other sports and provide alternate options besides a single feature game. Even airing a raw feed from a different sheet would be a welcome addition.