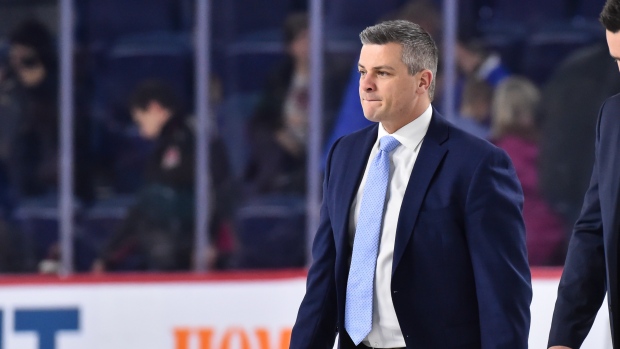 Kyle Dubas has made two coaching changes in his managerial career.

The first came on Dec. 3, 2012, when the then 27-year-old GM of the Ontario Hockey League’s Sault Ste. Marie Greyhounds fired Mike Stapleton as coach and replaced him with Sheldon Keefe.

It was a move that created a stir in junior hockey circles, bringing Keefe back to the same league where his behaviour as captain of the OHL champion Barrie Colts in 1999-2000 and association with the controversial David Frost drew unsavoury national attention.

But that coaching change had a profound impact in the Soo, according to Dubas.

“I’ve lived with seeing what a change in coaching and strategy can do with the exact same group of players,” Dubas said at a sports analytics conference in 2015, before he was hired by the Maple Leafs. “No change to the group of players. In fact, one player left, we traded one guy and added nobody to the team.

Fast forward to Thursday, the dawn of a new era for the Toronto Maple Leafs, as Keefe takes the reins from Mike Babcock in a season that began with sky-high expectations.

Keefe, now 39, is the first Leafs’ bench boss without any prior NHL head coaching experience since Hockey Hall of Famer George Armstrong more than three decades ago in 1988-89.

But there was little doubt Keefe would be Dubas’ man for the job.

Dubas and Keefe have been tied together since 2012. They reunited in 2015 when Dubas, then the assistant GM of the Maple Leafs, demoted Gord Dineen and hired Keefe to coach the AHL’s Toronto Marlies.

Keefe was the 2014-15 OHL and Canadian Hockey League coach of the year. Dubas described Keefe at that 2015 analytics conference as “very progressive and very open to learning everything that our analytics department could generate and give to him,” someone who “incorporated those things in.”

Here's Kyle Dubas four years ago, talking about what a change in coaching can do... pic.twitter.com/5WINZ3O7s9

Their relationship has certainly translated into success. Keefe brought Toronto its first pro hockey championship since 1967 when the Marlies captured the Calder Cup in 2018. Yes, the Marlies enjoy an enormous financial benefit with a payroll that dwarfs other AHL affiliates, but Keefe led them to two of the seven best regular seasons in the American League’s 84-year history.

The coach and manager have to be in lockstep in approach. There seemed to be at times a difference in opinion between Babcock and Dubas on how the Leafs should play. It’s likely that Dubas and Keefe will be better aligned.

So, what can the Maple Leafs’ players expect? Thirteen of them already have an idea, passing through the Marlies at one point or another, including William Nylander, Kasperi Kapanen, Andreas Johnsson, Travis Dermott, Justin Holl, plus goaltender Kasimir Kaskisuo before his call-up this season.

Current Montreal Canadiens forward Nick Cousins finished third in the OHL in scoring that season in 2012-13 for the Greyhounds when Keefe took over.

“He’s not a constant barker, he just held me accountable,” Cousins said Wednesday night after the Habs hosted the Sens. “If he didn’t like a play I made, he would let me know how he felt right away. His attention to detail is what makes him so good. He likes things done a certain way.”

The hallmark of a Keefe team, according to Cousins, is that “he wants the team to play as a five-man unit on the ice and have forwards backchecking through the middle of the ice so the defence can stand up [opponents] at the blueline.”

To accomplish that, there is a certain science to tapping into the modern-day player’s psyche. Keefe has been honing that craft since taking over the Junior “A” Pembroke (Ont.) Lumber Kings in 2006.

“I think he’s able to press certain buttons with guys to get the most out of them,” Cousins said. “He holds people accountable and he’s got a great feel for certain guys and the team and what makes them work. He was great for me.”

That isn’t to say Cousins and Keefe necessarily saw eye to eye all the time. There is a natural push and pull sometimes between player and coach.

“He was hard on me at first and maybe I didn’t like it,” Cousins said. “But at the end of the season when I looked back on it, it’s exactly what I needed. I think he just realized that I probably needed someone to be hard on me to find that consistency and I give him credit for that.”

In addition to Cousins, Keefe pushed along a number of players to the NHL from his days in Sault Ste. Marie, including Matt Murray, Jared McCann, Colin Miller, Zach Senyshyn and Darnell Nurse.

Keefe doesn’t have the bravado of Babcock. But he carries himself with a certain confidence and quiet swagger that will serve him well in the self-proclaimed centre of the hockey universe.

“He’s got a really good personality. He’s easygoing. But when it comes time to play, he’s got a competitive fire in him,” Cousins said. “I loved him as a coach and I’m not surprised he’s in the NHL. It was only a matter of time.”