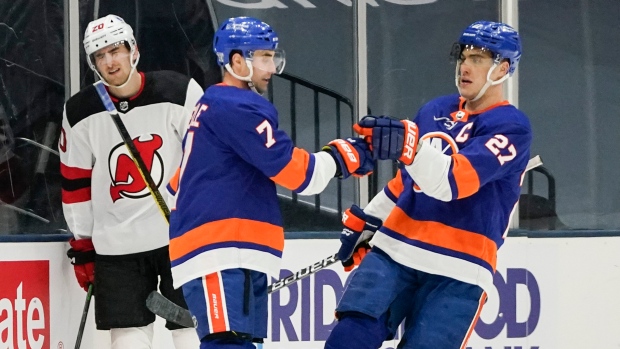 The Islanders improved to 3-1-0, while the Devils lost for the first time in regulation, falling to 2-1-1.

Varlamov has all three Islanders’ wins, allowing only one goal. That came early in the second period by forward Nathan Bastian, who ended Varlamov’s season-opening shutout streak at 142 minutes and 10 seconds, the eighth-longest in NHL history to begin a season.

“He’s been pretty consistent. It’s been really nice to see him come back and dominate in net,’’ Barzal said of Varlamov, who helped the Islanders reach the Eastern Conference finals in last summer’s bubble playoffs. “He looks really secure in there.”

Barzal opened the scoring with his second goal of the season at 4:43 of the first. Josh Bailey and Noah Dobson had assists.

Eberle made it 2-0 at 19:39 of the first, beating goalie Scott Wedgewood with a backhand off a feed from Anders Lee. Barzal had the other assist.

“New Jersey has some really good speed and we played the right way,’’ Islanders coach Barry Trotz said. “We’ve been a quick start team, that was key.”

Wedgewood started in place of Mackenzie Blackwood, who was placed on the COVID-19 list earlier Thursday, making him unavailable to play or practice in accordance with league protocols.

Blackwood had started each of the Devils’ first three games. Wedgewood made 31 saves in his first NHL start since Feb. 13, 2018, when he was with the Arizona Coyotes.

“I thought he played a solid game,’’ Devils coach Lindy Ruff said of Wedgewood, who was originally drafted by the Devils in 2010. “He made some great saves and gave us a chance to win.”

Bastian narrowed the deficit at 2:10 of the second with his first goal of the season. Rookie defenceman Ty Smith assisted on the goal. Smith has points in each of the first four games of his career and became the 11th defenceman in NHL history to achieve that feat.

Eberle made it 3-1 with a power-play goal at 1:56 of the third with Devils forward Travis Zajac in the penalty box. Eberle’s second goal of the game and season came after Dobson’s shot from the point ricocheted off the boards to Eberle below the right circle. Barzal also assisted.

“You want to get off to a good start. You want to contribute,’’ said Eberle, who had 16 goals last season and five more in the playoffs. “We’ve had good looks and hit a few posts. It was nice to finish it off tonight.”

Brock Nelson added another power-play goal at 5:16 of the third with a clean tip-in of a Nick Leddy point shot.

The Islanders outshot the Devils 15-6 in the first. The Devils had a 13-9 advantage in the second and a 12-11 margin in the third.

The Islanders were coming off a 1-0 victory over the Bruins in their home opener on Monday after splitting two games against the Rangers at Madison Square Garden last week, including a season-opening 4-0 shutout by Varlamov last Thursday.

The Islanders improved to 6-1-0 against Devils in their last seven meetings over three seasons.

Islanders defenceman and former Devils captain Andy Greene, who spent 14 seasons and played 923 games with the team before his trade to the Islanders, played his first game against his former team.