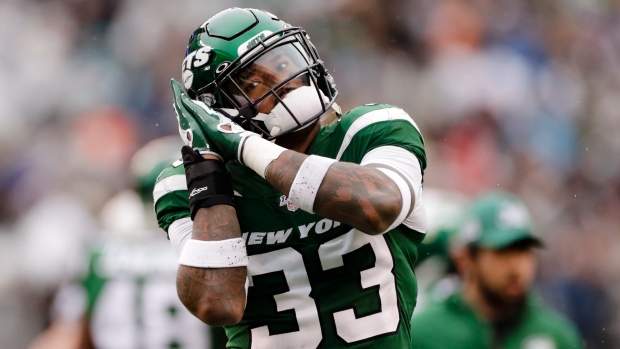 FLORHAM PARK, N.J. — The New York Jets will likely be without Jamal Adams and Brian Poole in their secondary against Miami.

Their backfield could also be missing Le'Veon Bell, who was sent home Friday with an illness that sidelined him for two practices.

Adams was officially listed as doubtful for the Jets' game against the Dolphins on Sunday with a sprained left ankle. The star safety sat out practice all week and appears likely to miss a game for the first time in his three-year NFL career.

Adams, who leads the Jets in tackles and sacks, was hurt early in New York's loss at Cincinnati last Sunday but played through the pain. He wasn't his usual playmaking self, and coach Adam Gase noticed the energetic safety was noticeably subdued.

"So at least guys know if he's not out there, they'll know what they need to bring to the table.”

Meanwhile, Poole was ruled out because of a concussion suffered at Cincinnati. Poole starts as the Jets' nickel cornerback, so defensive co-ordinator Gregg Williams will have to do more manoeuvring in his secondary.

Williams has preached since off-season workouts the value of his defensive players learning multiple positions, and that has become a factor during the season with so many players going down with injuries.

“I've had other seasons like that that I refer back to, but now living through this one, these young men, all of a sudden they nod now because it's not just voice,” Williams said. "They have experience in it, too, and they understand when that page goes up on the PowerPoint and that page is in the playbook that they look at all the time on next man up. It is a detailed synopsis of everything that they have to understand to honour that code and also participate.

Bell practiced fully Wednesday, but then sat out the next two days of practice — making him uncertain to play Sunday.

“He's sick, probably the same thing that's going around a lot of these other teams,” Gase said. “Biggest thing was getting him checked out and then get him out of the building so nobody else gets sick.”

If Bell can't go against the Dolphins, Bilal Powell, Ty Montgomery and Josh Adams would see more snaps. Powell is ninth on the Jets' career rushing list with 3,571 yards and needs only 19 to pass Bill Mathis for eighth.

The 31-year-old Powell is the longest-tenured member of the Jets after being a fourth-round draft pick in 2011. He injured his neck midway through last season and his playing future appeared uncertain. He was medically cleared and New York re-signed him in June.

“I just trusted the doctors on that,” said Powell, has rushed for 125 yards on 32 carries and caught four passes for 14 yards in limited action while playing behind Bell.

In other injuries, rookie offensive lineman Chuma Edoga appears likely to miss his second game in a row with a sprained knee that has him listed as doubtful.