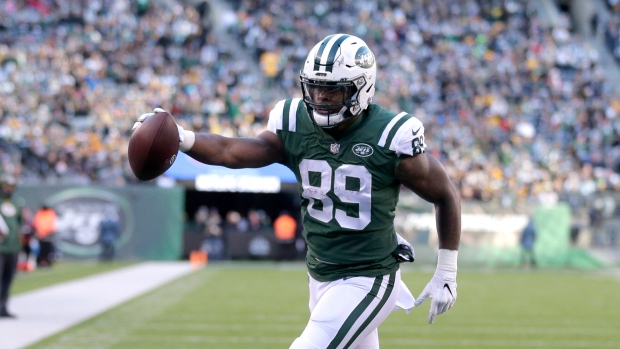 The tight end will be sidelined indefinitely with a broken rib suffered Sunday in the Jets' 34-27 win over the Giants. The injury came in Herndon's season debut, during which he caught one pass for 7 yards.

"It's one of those first or second (upper) ribs," coach Adam Gase said Monday. "That's in a place where it could be an extended period of time. If something happened, it could hurt him worse than what he already is."

It's the latest blow in what has been a lost season for Herndon. He was suspended the first four games for violating the NFL's substance abuse policy and then was sidelined four more with a hamstring injury.

He was active for the game last week at Miami but still wasn't completely healthy and didn't play. Herndon was ready to go against the Giants and took the field for the first time in the opening quarter, but he had little impact after getting hurt early. He had X-rays at MetLife Stadium after the game and a CT scan Monday, revealing the extent of the injury.

"It's disappointing," Gase said. "I feel bad for Chris, because he was excited to get back out there. For whatever reason, he couldn't catch a break this year. We'll see what happens, see what the doctors tell us for the rest of the season."

The Jets lost another starter on offence in right guard Brian Winters, who dislocated a shoulder and is likely done for the season.

Herndon's return was expected to provide a boost to a struggling offence and reunite quarterback Sam Darnold with one of his top targets. The two developed a quick rapport as rookies when Herndon caught 39 passes for 502 yards and four touchdowns.

"Me and Chris are pretty close, so, this one sucks," Darnold said. "But I know he's going to attack rehab."

Gase spoke often during the last several months about how excited he was to incorporate Herndon's versatile skillset into his offence this season. Now, the Jets might have to wait until next year to see what kind of impact Herndon can have.

"You guys saw him in the spring and saw him in training camp with kind of the things we wanted to do with him," Gase said. "I feel bad for him that he's not going to be able to do stuff like that."

Winters was hurt in the third quarter Sunday on an incomplete pass to Robby Anderson, who was also banged up on the play but returned to the game. Winters was attended to by team trainers and doctors for a few minutes before he walked off the field and into the locker room. He was replaced by Tom Compton, who could end up filling Winters' starting role.

The right guard injured a shoulder in the preseason opener and missed time during training camp. Gase said Winters "re-dislocated" his shoulder and will be sidelined "an extended amount of time."

"Most likely, it would be hard to get him back this season," Gase said. "We've just got to wait and see what all our options are. It's a possible surgery situation, so we're waiting to see what Brian wants to do moving forward."

It's possible Winters played his final game for the Jets. The 28-year-old guard is due to count $7.5 million on the salary cap next season, the final year of his contract, and general manager Joe Douglas is expected to upgrade and overhaul the offensive line in the off-season.

Winters was a third-round pick out of Kent State in 2013 and is tied with safety Rontez Miles as the team's second-longest tenured players behind running back Bilal Powell. Winters has dealt with several injuries in recent seasons, though, playing in 16 games only three times in seven seasons.

"Brian's a really good player, a really smart player," Darnold said. "To lose a guy like that, a player like that, it's a bummer for this team, this offence and really for the whole organization."

NOTES: Gase said RB Le'Veon Bell should be fine after dealing with sore ribs during the game Sunday. ... LB Brandon Copeland has a strained hip and will see a specialist to evaluate his injury.