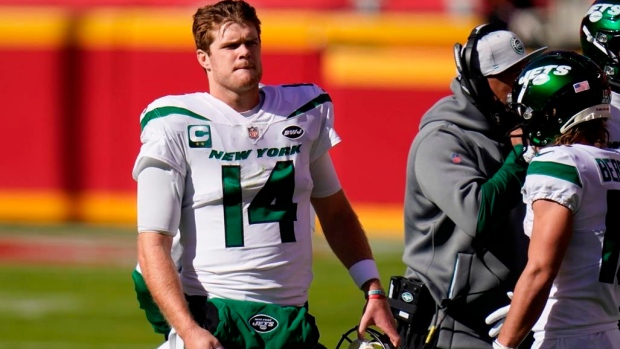 In a media availability on Wednesday, New York Jets general manager Joe Douglas said that nothing has changed about the way the team views quarterback Sam Darnold heading into next month's NFL Draft in which the Jets are set to pick second, but that he would still pick up any calls about the QB's trade availability.

A number of quarterbacks, including prospective No. 1 overall pick Trevor Lawrence of Clemson, BYU's Zach Wilson and Ohio State's Justin Fields, are expected to go off the board early, but Douglas gave no indication that his team might be among those looking for a pivot.

Jets GM Joe Douglas said the team is still investigating their QB options, but "With Sam (Darnold) our stance on Sam hasn’t changed. He’s an extremely talented player. Very smart, very tough. We have no doubt he’s going to achieve his outstanding potential."

“With Sam, our stance on Sam hasn’t changed,” Douglas said. “He’s an extremely talented player. Very smart, very tough. We have no doubt he’s going to achieve his outstanding potential."

Darnold, the third overall pick in the 2018 draft out of USC, has yet to match the heights reached by other members of that year's QB class, including Baker Mayfield, Josh Allen and Lamar Jackson. Over 12 games in 2020, Darnold threw for 2,208 yards on 217-for-364 passing with nine touchdowns and 11 interceptions.

Still, Douglas said he would be willing to listen on offers for the 23-year-old Capistrano Beach, CA native.

"I will answer the call, if it's made," Douglas conceded. "Sam is, we think, a dynamic playmaker in this league with dynamic talent...But if calls are made, I will answer them."

Douglas doesn't believe this kind of holding pattern in the passing game will affect the team when it comes to attractiveness in free agency.

The negotiating window for NFL free agency is set to open on Mar.15. The first round of the NFL Draft will be held on Apr. 29.