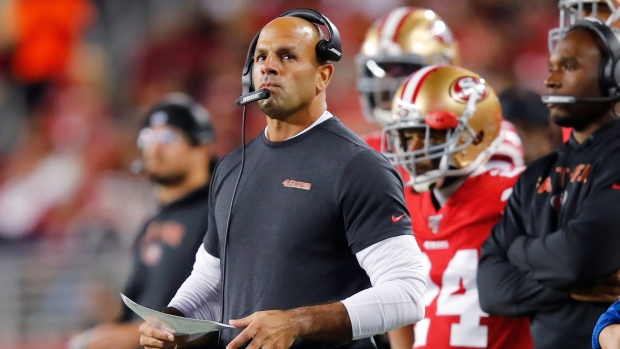 NEW YORK — The New York Jets reached an agreement in principle with San Francisco 49ers defensive co-ordinator Robert Saleh on Thursday night to hire him as their head coach.

Saleh replaces Adam Gase, who was fired by on Jan. 3 after going 9-23 in two seasons.

The 41-year-old Saleh emerged as the favourite for the Jets job when he was brought in for a second -- and this time, in-person -- interview Tuesday night, and those discussions extended into Wednesday. He was the first of the nine known candidates New York interviewed remotely to meet with chairman and CEO Christopher Johnson, team president Hymie Elhai and general manager Joe Douglas at its facility in Florham Park, New Jersey.

Saleh, a popular candidate among teams looking for a new coach, left to meet with Philadelphia. And the Jets also had an in-person meeting with Tennessee offensive co-ordinator Arthur Smith on Wednesday night and Thursday morning. After Smith left without a deal, New York had internal discussions and opted to hire Saleh.

Saleh, recognized as an energetic leader who is well liked by his players, had been the 49ers’ defensive co-ordinator under Kyle Shanahan since 2017, overseeing San Francisco’s defence that ranked No. 2 overall on the way to the Super Bowl last season.

The 49ers ranked fifth in overall defence this season despite season-ending injuries to pass rushers Nick Bosa — the 2019 AP NFL Defensive Rookie of the Year — and Dee Ford, as well as defensive linemen Solomon Thomas and Ezekiel Ansah. While San Francisco missed the playoffs, Saleh’s work with a banged-up and short-handed defence made him a popular candidate among the teams looking for a coach.

Saleh, who first interviewed with the Jets last Friday, also spoke with Detroit, Atlanta, Jacksonville and the Los Angeles Chargers.

New York pounced, though, and got its guy after Douglas promised the team would “cast a very wide net” in its search. Both Johnson and Douglas spoke about finding a leader, a CEO-type of coach who would oversee the entire operation of the team and help re-establish a culture and identity for the franchise.