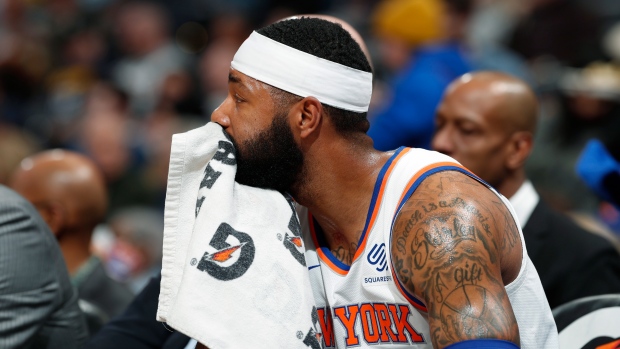 DENVER — Little went right for the Denver Nuggets in a rough third quarter. They made up for it with a big finish.

Nikola Jokic scored 11 of his 25 points in the fourth quarter, including a late go-ahead 3-pointer, to help the Nuggets hold off the New York Knicks 111-105 on Sunday night.

"That third quarter, we defended absolutely nobody," said Nuggets coach Michael Malone, whose squad blew nearly all of a 16-point halftime lead while being outscored 33-20 in the third. "What I liked about that fourth was 21 points allowed, 29 per cent shooting from the field (by the Knicks). Our defence stepped up when it needed to. Offensively, guys stepped up and made some plays and made some big shots."

Will Barton had 16 points, Gary Harris added 15 and Jamal Murray had 14, including a key 3-pointer in the late going. The Nuggets, who led by as many as 20 points, hung on for their 12th straight victory over the Knicks in Denver.

"We just stuck with it," Murray said. "We know how good of a team we are. I think we just took it to another level in terms of our intensity and focus, especially in those last seven minutes."

Marcus Morris led New York with 22 points. The Knicks were coming off back-to-back road wins under interim coach Mike Miller. They played Denver 11 days ago in New York and lost by 37 points, a setback that preceded the firing of David Fizdale as coach.

Miller said he liked the way the Knicks fought back to make a game of it.

"We put ourselves in a good position," Miller said. "If we can put ourselves in the position where, with four minutes to play, we have a chance to win, then we're doing what we need to do."

Taj Gibson banked in a shot to put the Knicks up 91-89 with 9:50 left to play their first lead since the opening minutes. New York led by as many as five points before Denver came back to tie it at 98 on Barton's 3-pointer.

The Knicks finished 2-2 on their four-game West Coast swing, including winning successive games for the first time this season.

"We grew a lot this road trip," said Julius Randle, who finished with 20 points. "Being able to come out .500 on a road trip is always good. We gave ourselves a chance to make it a great one, being up four late in the fourth. We didn't capitalize and missed some easy shots. They made shots and we lost. We get to come home and give ourselves a chance to start up again and play good again."

Knicks: Guard Allonzo Trier was inactive for a second consecutive game because of a concussion.