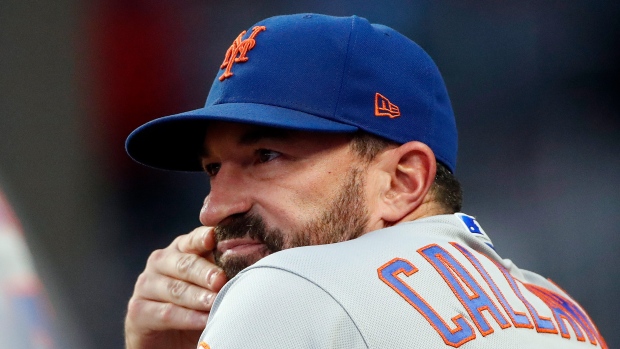 After the New York Mets fined their manager and pitcher Jason Vargas for their expletive-filled confrontation with a reporter following a weekend loss, Callaway stopped short of saying he was sorry for the incident during his first meeting with the media on Monday.

Callaway cursed at Newsday beat reporter Tim Healey and Vargas had to be restrained from charging him in the cramped Wrigley Field clubhouse after a 5-3 loss on Sunday. There was no physical contact.

Two hours after Callaway initially met with a large group of media members and 70 minutes before first pitch in Philadelphia, Callaway clarified his remarks.

General manager Brodie Van Wagenen announced the fines but not disclose the amount. He said the team spoke to MLB and didn't expect any further discipline.

"We are committed to trying to create a healthy work environment for everybody," Van Wagenen said. "The altercation was disappointing. It was regrettable on many levels."

"Frustrations were high and he understands from a leadership position that we can't lose control and he knows that's not something that should've happened," Van Wagnenen said. "My confidence remains the same in Mickey's ability to do his job."

Mets ace Jacob deGrom said players held a team meeting before the game and he spoke to reporters on behalf of the club.

"It was a tough loss. Sometimes tensions run high. We don't anticipate it happening again," deGrom said. "Our main focus from the meeting is to move forward from this and focus on the Phillies."

In a story published by Newsday on Sunday night, Healey said Mets Chief Operating Officer Jeff Wilpon called him "to apologize on behalf of the organization."