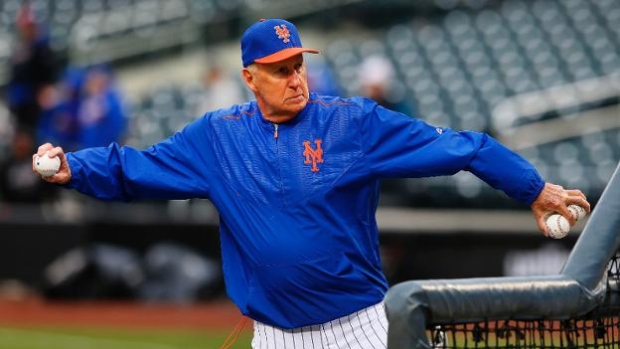 The team announced the moves before its game against the Chicago Cubs.

The 82-year-old Regan has been the Mets' minor league assistant pitching co-ordinator since 2016 after spending 2009-15 as the pitching coach for Class A St. Lucie of the Florida State League. The former major league pitcher managed the Baltimore Orioles during the 1995 season.

Bones began this year as the pitching coach for St. Lucie. He was the Mets' bullpen coach from 2012-18.

Accardo was in his first full season as the Mets' minor league pitching co-ordinator.

The Mets entered Thursday with a 35-39 record and in fourth place in the NL East. They expected to contend in the division behind their pitching, but had a staff ERA of 4.67, which was 20th in the majors. The bullpen ERA was 5.38 overall (28th in the majors) and 8.20 since June 1.

New York also had 16 blown saves, most in the big leagues, in 33 chances.

"When we assessed the first 2 1/2 months of the season, in particular over the course of the last several weeks, we felt the bullpen performance had a lot of room to improve," general manager Brodie Van Wagenen said.

"I think that is the root of this move. Our belief is we have the talent to be better than we've performed."

Manager Mickey Callaway said he believes Regan's work in the organization made him the best candidate for the job.

"He's got a passion for this game, he has a passion for pitching and our guys are familiar with him and respect the hell out of him," Callaway said.

Despite the struggles, many of the pitchers were caught off guard by the move.

"I was kind of shocked this morning when I found out about it," Jacob deGrom said. "The goal here is to win baseball games, and we weren't doing that. It seems like someone always takes the blame for something like that."

Callaway hired Eiland when he took over before last season and credits the longtime pitching coach for helping deGrom develop into a Cy Young Award winner last year.

Eiland was the pitching coach for a pair of World Series champions — the 2009 New York Yankees and 2015 Kansas City Royals.

"Dave is a tremendous pitching coach," Callaway said. "The bottom line is the results weren't there. We've been all looking ourselves in the mirror."

Van Wagenen was asked if the move is an indication Callaway is on the hot seat.

"Absolutely not," he said. "Mickey has my full vote of confidence. He's our manager. This is a scenario where we want to continue to give Mickey the best resources and the best coaching staff to help him achieve our goals."