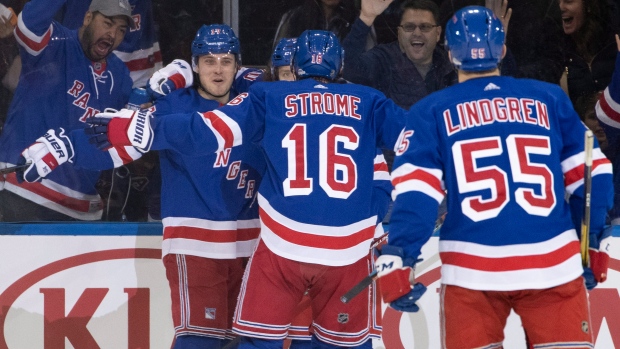 Mika Zibanejad also scored and Artemi Panarin extended his point streak to eight games with two assists as the Rangers won for the seventh time in eight games.

Shesterkin made 40-plus saves for the fourth time in his 10th career start and extended his winning streak to seven games. The Russian rookie is 9-1 this season.

“We want to make it hard for management to split this group,” Fast said when asked about the looming NHL trade deadline. “We have done a really good job as of late to show that we can win games. In the end, it’s up to them, but I think we showed that we can be very competitive.”

Joe Thornton scored twice, and Aaron Dell made 30 saves as the Sharks lost their third straight.

Fast gave the Rangers a 3-2 lead at 6:54 of the third period. Jacob Trouba’s shot from the right circle created a rebound and Fast floated a puck over Dell on his second opportunity from the side of the crease.

Fast scored his first goal of the game and 10th of the season to give the Rangers a one-goal lead. Panarin made a nifty deke, then slid a puck between Dell’s legs to set up Fast. Ryan Strome picked up the secondary assist and extended his career-high point streak to eight games.

“There is such an honesty to his game it is certainly infections throughout our lineup,” Rangers coach David Quinn said of Fast. “He is an important piece to the puzzle.”

Thornton evened the score at 1-all late in the first period, scoring on a slap shot at 17:55. Defenceman Brent Burns broke up an odd-man rush in the defensive zone before the game-tying goal. Timo Meier and Mario Ferraro assisted on the play.

The Sharks took a 2-1 lead at 13:47 of the second after Burns’ slap shot from the point bounced off the Rangers goalie and then hit Thornton’s leg before sliding into the net. It was Thornton’s first multi-goal game since Feb. 18, 2019m when he recorded a hat trick against the Boston Bruins.

“We couldn’t have a better first period than we had,” Sharks coach Bob Boughner said. “It’s disappointing because we are two games into this road trip and I thought that we put ourselves in a chance to at least get points out of each game. And we didn’t.”

Zibanejad scored for the fourth consecutive game, tying the score at 2-2 late in the second period. Panarin knocked the puck away from Evander Kane and Zibanejad capitalized. It was Panarin’s 24th multi-point game this season.

In his first appearance at Madison Square Garden since being acquired in a trade with the Carolina Hurricanes, Julien Gauthier had a penalty shot late in the second period after Jacob Middleton dragged him down on a breakaway. However, Dell denied Gauthier's backhanded attempt.

NOTES: Kane returned to the Sharks lineup after serving a three-game suspension issued by the Department of Player Safety. … Melker Karlsson did not dress and is considered day to day. … San Jose scratched defenceman Nicolas Meloche and forward Antti Suomela. … Goaltender Henrik Lundqvist did not start for the 10th straight game. ... The Rangers concluded their 10th set of back to backs this season. … New York scratched goaltender Alexandar Georgiev, forward Greg McKegg and defenceman Brendan Smith.