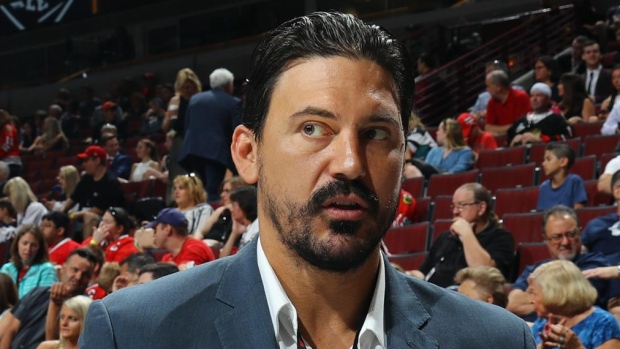 The New York Rangers’ pointed statement calling for the head of George Parros, the NHL's dean of discipline, may go down as the most expensive words typed in hockey history.

The Rangers were fined $250,000 by the NHL on Thursday – or $2,212 for each of the 113 words, still nothing that billionaire owner James Dolan will lose sleep over.

But it is among the heaviest fines in league history, considerably more than the $100,000 levied upon the San Jose Sharks in 2013, the last team to publicly disagree with a disciplinary decision.

In the NHL’s view, it was one thing for the Rangers to disagree with Parros’ decision to fine but not suspend Tom Wilson for Monday’s melee at Madison Square Garden, but another to call it a “dereliction of duty” and claim that Parros is “unfit to continue in his current role.”

“Public comments of the nature issued by the Rangers that were personal in nature and demeaning of a league executive will not be tolerated,” NHL commissioner Gary Bettman said in a statement released Thursday morning.

The optics of the fine – 50 times more than the $5,000 that Wilson was dinged for his punch to Pavel Buchnevich – were not lost on the Rangers on Thursday. Wilson’s ensuing takedown of Rangers star Artemi Panarin, which went unpunished, was the powder keg that set off a string of six fights before Wednesday night’s rematch was five minutes old. Wilson left the game after the first period with what the Capitals called an “upper-body injury,” though many suspect the team kept Wilson off the ice in an attempt to calm a charged environment.

Now, after two days to breathe: What did the Rangers accomplish with their words?

If their goal was to effect change in the Department of Player Safety, their statement may have had the opposite effect.

The NHL, according to league sources, is not making changes to the Department of Player Safety.

The Rangers must have known that when hitting send. There was zero chance Bettman would allow any league employee, let alone one in a consistently scrutinized role, to be mowed down by an unhappy owner stamping his feet and speaking out of school.

It is clear the statement came directly from MSG Sports chairman Dolan. In the hours before they were fired on Wednesday, Rangers president John Davidson and GM Jeff Gorton were in damage-control mode.

While it may not have had anything to do with their departures from the organization, sources say Davidson and Gorton both attempted to distance themselves from the statement, telling other executives that they did not know of its existence until it was released publicly.

The two long-time hockey men knew the Rangers’ no-holds-barred approach was poorly received by both the league and their front office counterparts.

Not eating your own, especially not in public, is at the core of hockey’s omertà.

As a result, the Rangers’ statement actually seemed to have gained Parros additional backing around the league.

According to multiple team and league sources, the Rangers’ statement galvanized support for Parros and the Department of Player Safety from other teams and general managers in feedback that was delivered to the commissioner’s office. That support did not wane after gloves littered the Garden ice on Wednesday night.

Nearly half of the NHL’s general managers – the gatekeepers of the league who collectively influence the policy that governs Parros’ department – were canvassed for this story and not one expressed concern or doubt about Parros’ competence.

“I have to be honest. I did not like and was not comfortable with George’s decision,” one NHL GM said Thursday. “I tried to take the name and number off [Wilson’s] jersey and watch the play unfold. I didn’t like the look of it. He looked like someone unhinged. Then when you factor in that it was Wilson, with a history of aggression – I don’t think that’s something we want to see in the game.

“But I am able to separate that from the position itself. I support George. I will be watching closely. I think we all are. I would think that there is a suspension coming for Buchnevich’s cross-check. But George has the toughest job in the league and I think for the most part, he has done a good job.”

Not everyone agreed with that manager’s sentiment, as there were other GMs in the league who felt from the jump that Parros made the right call.

“I don’t think what Wilson did was a suspendible act,” another GM said. “I think that statement is part of the problem with society right now. Everyone wants everyone to be fired. That isn’t how it works and that’s not how you do it. George has the worst job in hockey. On every decision, one team is happy and one team is pissed.”

Nonetheless, this will be a fascinating off-season to monitor developments on both the Player Safety and the officiating/hockey operations front in the wake of Tim Peel's career-ending suspension, which brought a call for change to the way the game is called. Is it possible the rule book may be reworked to give Parros and the Department of Player Safety more leeway to suspend?

Either way, the sense from the NHL’s architects of the game is that significant overhaul in Player Safety is unnecessary.

“I disagreed with the Rangers’ statement and I also disagree with changes to the Department of Player Safety,” yet another GM said. “Is there room for improvement? Yes. There is always room for improvement. But overall, we do not need sweeping changes. I imagine the statement was orchestrated from the top, which just put everyone in a poor position.”