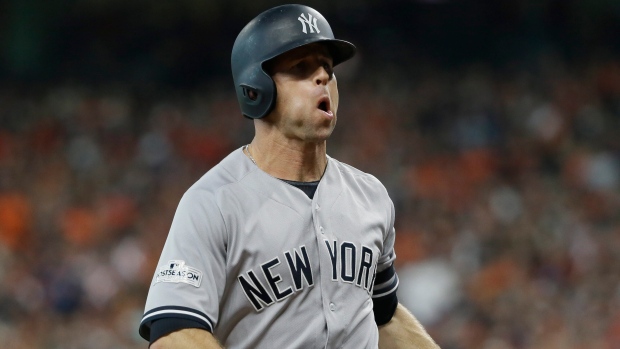 TAMPA, Fla. — Brett Gardner and the New York Yankees have finalized a $5.15 million, one-year contract for the outfielder to return for a 14th season.

New York also finalized its deal with left-hander Justin Wilson on Tuesday that also could be worth $5.15 million for two seasons.

Both deals are likely to be worth $4 million for one season but had complicated structures that could lower their 2021 evaluation for the luxury tax.

To clear roster spots, right-hander Luis Severino was put on the 60-day injured list as he recovers from Tommy John surgery last Feb. 27, and outfielder Greg Allen was designated for assignment.

Gardner gets a $1 million signing bonus payable within 30 days of approval by the commissioner's office and a $1.85 million salary this year. His agreement includes a $2.3 million player option for 2022. If Gardner declines the option, the Yankees would have a $7.15 million option for 2022 with a $1.15 million buyout.

The 37-year outfielder is the last player remaining from the Yankees’ last World Series title in 2009.

He had a one-year contract for 2020 with a $2 million signing bonus and a $10 million salary that became $2,962,963 in prorated pay. Gardner became a free agent after the Yankees declined a $10 million option, triggering a $2.5 million buyout.

Manager Aaron Boone said Saturday that for now Clint Frazier was projected over Gardner in an outfield that has Aaron Hicks in centre and Aaron Judge in right.

“I expect Clint to be our left fielder and to be in that starting lineup,” Boone said. “A guy like Gardy is a guy who would play a lot, certainly, as a lot of our guys that will quote unquote be bench players or whatever, but Clint is going to be a regular player for us going into the season.”

Over the full 2019 season, Gardner reached career-best totals of 28 homers and 74 RBIs to go along with a .251 average. He is a fan favourite for his fiery demeanour and longevity.

Gardner and the switch-hitting Hicks often were the only left-handed bats in the Yankees’ starting lineup last year.

“One of the things I look at is his toughness, the ability to post, the ability to play through things, the premium he puts on being ready to go each and every day,” Boone said. “There is a blue collar-ness to the way he goes about his business I think that is infectious. He’s got a little bit of a chip on his shoulder that he plays with.

“And I think he’s got a young man’s body. He’s in great shape. He has aged very well. And I think you’ve seen him really I think adapt and apply information to continue to make himself in a lot of ways a better player but certainly still a very relevant player,” he said.

Wilson joins a bullpen headed by closer Aroldis Chapman and Zack Britton, both left-handers. Hard-throwing right-hander Chad Green is joined by side-arming right-hander Darren O’Day, who was signed after the Yankees dealt Adam Ottovino to Boston in a cost-cutting move.

Wilson averaged 95 mph with his fastball, throwing it slightly more often than on half his pitches. He also throws cutters, mixing in an occasional slider and curveball.

Wilson is a nine-year major league veteran who spent his first three seasons with Pittsburgh. He played catch at camp Tuesday and driving from Texas.

“I'm really excited about him. He's somebody that I think we kind of early on in the winter time identified as someone that could potentially impact our club," Boone said. “We think he's going to be another good complement to what we hope is a really special bullpen.”