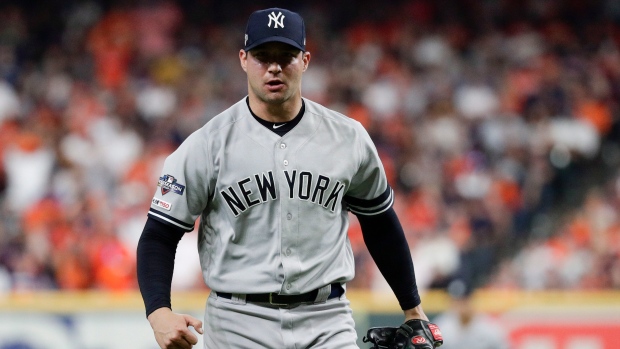 NEW YORK — The Yankees and Astros plan all-bullpen games from the start in Game 4 of the AL Championship Series in a sign of the times.

With the best-of-seven series tied 1-1, New York's Luis Severino starts Game 3 on Tuesday against Gerrit Cole. Masahiro Tanaka began the opener for the Yankees and James Paxton was on the mound for Game 2.

Neither team had a starting pitcher it wanted to use for Game 4 on Wednesday.

"J.A. Happ could very much be in the mix, as well as I picture our bullpen being unleashed on that day," New York manager Aaron Boone said Monday as the series shifted to Yankee Stadium.

A starter during the regular season, Happ has relieved during the playoffs. The 36-year-old left-hander entered in the 10th inning of Game 2, escaped a two-out jam, then allowed Carlos Correa's home run leading off the 11th that gave the Astros a 3-2 win.

Houston manager A.J. Hinch started Zack Greinke in the opener followed by Justin Verlander in Game 2. Hinch anticipates rookie right-hander José Urquidy will pitch at some point in Game 4 but preferred to call it "a bullpen day."

"That's the cool thing to say nowadays," Hinch said. "Maybe Urquidy starts, maybe he comes in the middle of the game. And we go with somebody with a little bit more experience. But we haven't made that decision. We don't even know if we're going to play that day. There's been a lot of talk about the weather."

Heavy rain is forecast for Wednesday, and if Game 4 is postponed, Tanaka and Grienke would start Thursday on normal rest.

Boone removed Paxton after 2 1/3 innings and 51 pitches, and the bullpen allowed two runs and three hits in 7 2/3 innings. George Springer hit a tying home run in the fifth on Adam Ottavino's first pitch.

"I don't think he's as far off maybe as is being talked, but he's certainly not as sharp as he's been most of the year," Boone said of Ottavino. "I feel like he's close to being that, and I think some small successes hopefully will spur him on because he needs to play a big role for us."

Boone said a decision won't be made until Tuesday on outfielder Giancarlo Stanton, who strained his right quadriceps in the opener and missed Game 2.

Limited by injuries to 18 games during the regular season, Stanton homered in the opener. If he were dropped from the roster against the Astros, he would be ineligible to return this year.

"It is a sensitive decision, a tough decision," Boone said. "We'll just try and evaluate and try and get as honest as feedback as we can from Giancarlo."

Aaron Hicks could get his first start since Aug. 3, taking over in centre field from Brett Gardner, who would replace Stanton in left. Sidelined by an injured flexor near his right elbow, Hicks pinch-hit for starting left fielder Cameron Maybin and grounded out leading off the 10th inning in Game 2, then moved to centre.

"Aaron is very much in play," Boone said, "Thought he had a good at-bat, looked like Aaron Hicks. So he'll very much be part of the conversation moving forward."

After missing most of the season with a lat injury sustained while warming up for his first spring training start, Severino returned for three outings in late September, then wiggled out of trouble to pitch four scoreless innings in Game 3 against Minnesota.

While Tuesday's game is scheduled to start shortly after 4 p.m., it is late enough in the year that the mound should be covered in shadows in addition to home plate.

BACK IN THE BRONX

"I always like our chances going home, especially for three," Yankees slugger Aaron Judge said. "It's time to roll. It's the post-season. We're going to get it done."

New York players count on the ability of Yankees fans to rattle opponents.

"They're going to be just as jacked up as we are," reliever Tommy Kahnle said.