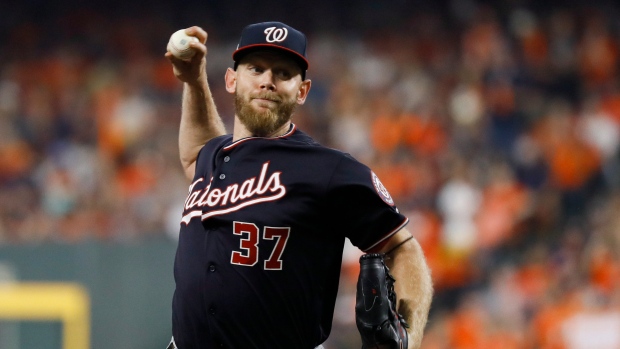 SCOTTSDALE, Ariz. — After falling short of reaching the World Series for the 10th straight year, the New York Yankees intend to have conversations with top free agent pitchers Gerrit Cole and Stephen Strasburg.

"It's a good time to be them," Yankees general manager Brian Cashman said Monday as the general managers meeting began. "Certainly we'll have conversations from our perspective. And they'll either lead to further ones or lesser ones."

During a moonlit availability in a courtyard surrounded by palm trees, Cashman confirmed changes in the team's staff, led by Matt Blake replacing Larry Rothschild as pitching coach. He said New York has had conversations with the agents for several of its players who became free agents, including outfielder Brett Gardner, shortstop Didi Gregorius and reliever Dellin Betances.

Starting pitching is the Yankees' biggest need following their loss to Houston in a six-game AL Championship Series. Manager Aaron Boone's rotation could use a premier arm to join a group that includes Luis Severino, James Paxton, Masahiro Tanaka and J.A. Happ.

Domingo Germán is being investigated by Major League Baseball under its domestic violence policy, which caused him to miss the post-season and could lead to a suspension at the start of next season. Cashman said possibilities to consider are Jordan Montgomery, who has completed his recovery from Tommy John surgery, and prospects Deivi García and Michael King.

"We have a lot of talent that's hungry and looking to take another step or two," Cashman said. "Aaron Boone in his end-of-season press conference described it probably perfectly. We weren't a player or two away, we were a play or two away from playing in the World Series."

"Of course, we're going talk Strasburg. We'll talk to Cole. We'll talk to the higher-end guys clearly and have conversations there," Cashman said. "And we'll also talk about some surprise guys, I'm sure."

Strasburg helped Washington win its first World Series title and Cole boosted Houston within a victory of its second championship in three seasons. An innings-eating ace could ease the burden on the bullpen — New York's starters combined for 778 1/3 innings, ahead of only Seattle, Toronto, Tampa Bay and the Los Angeles Angels.

"It's not something we're not interested in. It's just something that's been hard to get ahold of," Cashman said.

Cashman's first off-season move was to entice closer Aroldis Chapman to stay rather than opt out by amending his contact to a $48 million, three-year deal from an agreement that had $30 million and two seasons left. Cashman has had several discussions with Joe Bick, the agent for Gardner, a 36-year-old who is the longest-tenured Yankees player at 12 seasons. Gardner hit .251 and set career bests with 28 homers and 74 RBIs. With Aaron Hicks sidelined at the start of next season following Tommy John surgery, keeping Gardner would appear to be appetizing.

"We've had a longstanding, very successful relationship," Cashman said. "And obviously we'll see if that can continue or not."

Cashman also has talked with Jim Murray, the agent for Gregorius and Betances. They may or may not fit into a payroll already with the current roster projected to be about $212 million for purposes of the luxury tax, above the $208 million threshold.

Blake agreed to join the Yankees even though he was promoted by Cleveland to director of pitching development on Nov. 5 after three seasons as assistant director of player development. Rothschild, who had been with the Yankees for eight seasons, will become San Diego's pitching coach.

"I'm charged with making tough decisions over time and, obviously, as we move forward I felt I wanted to gravitate to somebody that had a little bit more in- depth knowledge of some of the newer technology out there," Cashman said. "It doesn't mean Larry hasn't been exposed to it. So it's a balance."

Cashman said right-hander Masahiro Tanaka's surgery on Oct. 23 to remove bone spurs "was routine and one that he's had in the past" and added "he was expected to be ready to go by spring training. I'm sure we'll be careful on the front end."