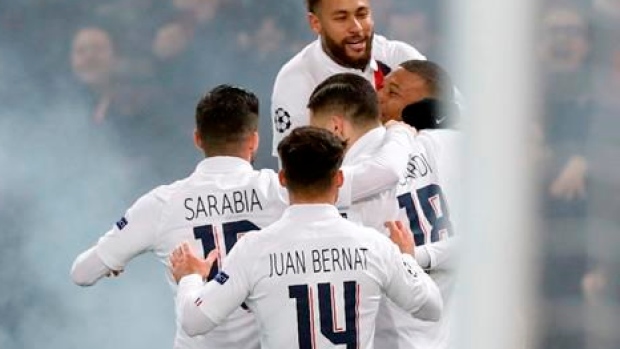 PARIS — Neymar scored one goal and helped create three more as Paris Saint-Germain completed its Champions League group stage with a 5-0 rout of Galatasaray on Wednesday.

Kylian Mbappe timed his run well in the 33rd minute when he latched on to Neymar's defence-splitting pass and squared the ball to Mauro Icardi, giving the Argentine poacher an easy tap-in from close range.

Two minutes later, Neymar broke through from midfield and fed winger Pablo Sarabia, who beat his marker with a quick step-over move and angled a low shot from the right of the penalty area into the bottom left corner.

Neymar even started the move which led to his goal just after halftime, finding Mbappe with a pass and taking the France star's back-heeled return before rifling the ball into the top corner from inside the area.

Another fine pass from the Brazil star released Mbappe in the 63rd and he confidently stroked the ball home from the left of the area.

PSG coach Thomas Tuchel is hopeful Neymar has finally turned the corner in terms of physical fitness, after being hampered by injuries earlier this season and in previous years.

“He was decisive for us and he’s getting better. He worked hard today, won lots of balls and did well defensively,” Tuchel said. "He’s finding his form, it's easier for him to accelerate now."

Mbappe and Neymar allowed substitute Edinson Cavani, the club's all-time leading scorer, to net the fifth goal from the penalty spot in the 84th.

“It was a nice gesture. Everyone can see it," Tuchel said. ”He (Neymar) gave the ball to Edi, and it’s a good example for the team.”

PSG was already qualified before the game as group winner and topped Group A with 16 points, five ahead of second-place Real Madrid. Club Brugge finished above Galatasaray in third spot to qualify for the Europa League.

“We accept that Paris and Real Madrid are on a different level to us,“ Galatasaray coach Fatih Terim said. “That was a bitter goodbye for us. We weren't bad for 30 or 35 minutes, but that doesn’t mean a thing."

Cavani was once again on the bench, with coach Thomas Tuchel preferring Icardi as his centre forward flanked by Mbappe and Neymar.

But Cavani remains a huge fan favourite and his goal got the biggest cheer of the night.

“It was important for him to score,“ Tuchel said. “It’s the best way to get confidence and I’m very happy for him."

The match was played amid high tensions between the two fan bases. It was classified as high risk and there were fan clashes outside the stadium beforehand and incidents inside during the game itself.

A large section of Galatasaray ultras gathered on a big roundabout near Porte de Saint-Cloud metro station and some 150 PSG hooligans, dressed all in black and some with their faces covered, charged across the road to attack the group at around 6 p.m. local time.

Riot police intervened with tear gas to disperse the marauding fans, who threw flares at each other and let off fire crackers. There was further fighting in a nearby street.

Fans from both groups then goaded each other inside the stadium, although they were separated by fencing and prevented from any physical confrontation.

During the second half flares were lit in the Galatasaray section of supporters, and a smoke bomb appeared to be thrown from there toward riot police below. Smoke was billowing from the field as Mbappe scored and then celebrated his goal.

The animosity between the sides dates back to a match between PSG and Galatasaray in March 2001, when extreme fighting inside Parc des Princes left 56 injured and caused that game to be interrupted for 20 minutes. There were also fights when they met five years earlier.