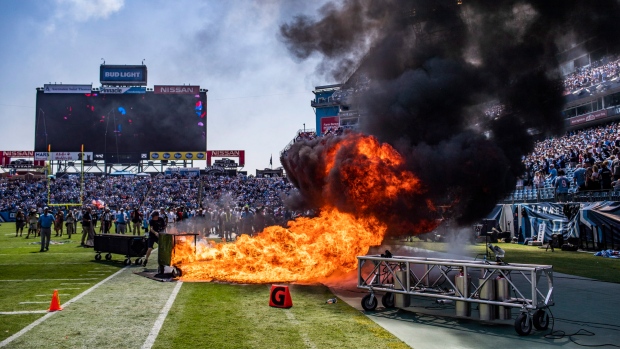 A pyrotechnic accident lights a part of the field on fire before Colts-Titans game , The Canadian Press

NEW YORK — The NFL has banned any on-field pyrotechnics and "flame effects" at any league or team events, including games, in the wake of an incident at last Sunday's game at Nissan Stadium.

A league spokesman said the matter was being reviewed and the prohibition would last at least through the review.

Equipment used for pyrotechnics during pre-game festivities burst into flames in the north end zone about five minutes before kickoff between the Titans and Colts. Workers quickly started putting out the fire near the 5-yard line on the sideline near the Titans' locker room.

The show went on as workers extinguished the flames as Taj George, wife of Eddie George and a member of the group Sisters With Voices (SWV) sang the national anthem.

The Titans, who lost to the Colts in that game, put out a statement last Sunday:

"Following the pregame introductions today, there was a mechanical failure by one of the pyrotechnic devices which resulted in a fire. The vendor will be required by the state of Tennessee to undergo an inspection for the defective device and the others that were used to determine the final cause. The field staff acted quickly to extinguish the fire, which resulted in no injuries and minor field damage."