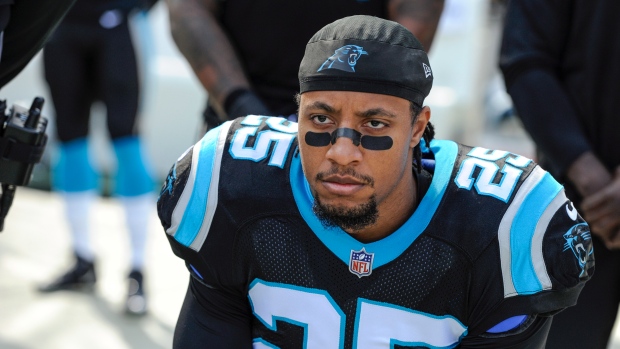 The NFLPA added that Reid's claim that the CBA isn't valid is “completely false.”

Ben Meiselas, who represents Reid, believes the changes regarding filing for Social Security disability payments should invalidate the collective bargaining agreement set to run through 2030. And he points to the last paragraph of a memo sent to the players Wednesday that describes the alterations made as proof the CBA now in force is not the full document the players voted on.

“It is correct that the final version of the 456-page CBA includes an additional subparagraph with a cross-reference to a section of the Disability Plan that the parties had inadvertently omitted in an earlier version," the NFL Players Association memo says. "The final CBA corrected the omission, as the bargaining parties were required to do based on their agreement that 'if any typographical errors or incorrect cross-references are found in the 2020-2030 Agreement, the parties will act in good faith to correct them' (just as the parties had similarly agreed when finalizing the 2011 CBA). ... This correction did not, however, change what had been agreed to with the NFL, what information had been provided to players, or what players had voted upon.” https://twitter.com/meiselasb/status/1245518734489317376?s=20

“Sad NFLPA puts more work into memo deceiving players than negotiating,” he said in a text message and social media posting. “They now claim change to CBA after vote was `cross-reference ... inadvertently omitted in a earlier version,' and such a change is OK based on secret side deals and oral understandings w/ NFL. Complete trash.”

Hall of Fame tight end Shannon Sharpe also questioned the validity of the new CBA, tweeting: “Nothing substantive, but changes were made? WOW. Why is D. Smith still running the NFLPA?”

Smith is executive director of the union.

A letter from Meiselas and law firm partner Ray Genco to the union highlighted a difference in wording in the section about the league's disability plan that affects hundreds, and potentially thousands, of ex-players who applied for Social Security disability insurance payments before Jan. 1, 2015. In the version the players received and approved, those offsets applied only to players who applied after Jan. 1, 2015.

But the union's letter to its members disputes the effect of the change, and notes, “The Social Security income offset was necessary bargaining trade in order for the NFLPA to obtain other enhanced and expanded benefits.”

Meiselas told The Associated Press on Monday that the discrepancy was discovered when lawyers were "working with families of disabled players to guide them through the process."

"We've been obviously critical of the CBA from the outset because it takes from disabled players. And so in advising them, we were looking at it and pointing out where they had issues and where they were going to be likely getting less money," Meiselas said. "And then we saw it, and we go, 'I don't remember seeing this in Paragraph B.'"

Meiselas questioned why the language was added and why the NFL and players' union weren't transparent about the change.

"And so Eric's letter demands the invalidation and an investigation and a re-vote because how do you stick in language that players didn't know they were voting for?" Meiselas said. "It's perplexing and concerning even if the changes were minor that there was no transparency and no explanation. But here, the changes are major and drastically and dramatically impact disability benefits to players."

The union's memo said there was transparency about the offsets and that they would affect about 400 players.