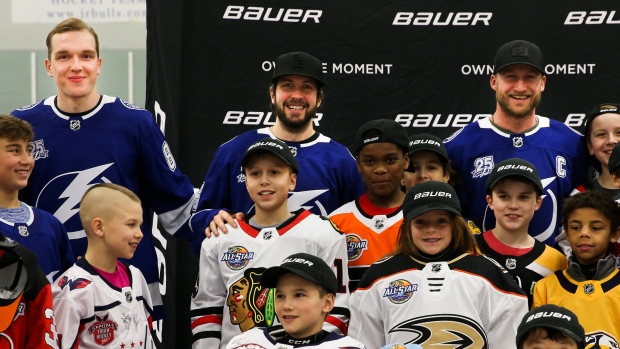 TAMPA, Fla. — The NHL All-Star game is being played in Tampa Bay for the first time since Wayne Gretzky made his last appearance in the showcase and many still questioned whether the league could prosper in a non-traditional market better known for sunshine and beaches than winning hockey.

Nearly two decades later, the answer is a resounding yes.

Not only has the league flourished in Tampa and other Sun Belt locations where the game continues to grow, the hometown Lightning have evolved into what generally is regarded as a model franchise — not merely for hockey, but all of pro sports.

Gretzky made the last of his 18 All-Star appearances that year and had a goal and two assists to capture MVP honours.

"It's very special to be named to an All-Star game, regardless of where it's played. But when it's in your home city, it's that much more special," said Lightning star Steven Stamkos, a five-time selection.

"I know the amount of work that's gone into preparing for it," Stamkos, one of four Tampa Bay players in this weekend's game, said. "It's going to be a great showcase of a hockey city. ... I'm sure we'll put on a great show."

Downtown Tampa, along with 19,000-seat Amalie Arena, has been transformed into a colorful tribute to the league's biggest stars.

Festivities began Friday with a free outdoor concert headlined by Fitz and the Tantrums and the opening of All-Star PreGame, a three-day fun fest open to the general public as well as fans fortunate enough to land game tickets.

Media Day and the All-Star Skills Competition are Saturday, followed by Sunday's main event featuring teams from the Atlantic, Metropolitan, Central and Pacific divisions playing a three-game tournament in a popular three-on-three format adopted in 2016.

And if the game's brightest stars coming to town isn't a big enough reason to celebrate, All-Star weekend is being held in conjunction with Tampa's annual Gasparilla Pirate Invasion, an annual event that attracts about 200,000 people for a parade along the city's downtown waterfront.

"It's a big block party. There's something for everyone, whether you're a season ticket member or somebody who just enjoys catching an occasional Lightning game on TV," former Lightning general manager Jay Feaster, now the club's executive director of community hockey development, said.

Feaster assembled the team that won Tampa Bay's only Stanley Cup title in 2004, however the Lightning never fully reaped the benefits of the championship run because a labour strife wiped out the next season.

A growing fan base ready to embrace the club's success suddenly didn't have a defending champion to cheer.

Feaster is excited about a resurgence led by owner Jeff Vinik, coach Jon Cooper and Hall of Famer Steve Yzerman, who as the current general manager has composed a talented young roster built for long-term success.

The Lightning, celebrating their 25th season, reached the All-Star break with the league's best record and have re-emerged as a championship contender after narrowly missing the playoffs a year ago.

The Lightning dropped the Stanley Cup final to Chicago in six games three years ago, then came within one victory of returning to the NHL's biggest stage the following season.

"What Steve Yzerman has done I think is just masterful, the way he's assembled this team," Feaster said.

"He's assembled it (to be) not just one and done. We won one Stanley Cup when I was general manager," Feaster added. "We got back to the playoffs after the lockout a couple of times, but never got close to an Eastern Conference final or a Stanley Cup final again."

The Lightning will be represented by a league-leading four players in Sunday's game — Stamkos, goalie Andrei Vasilevskiy and forwards Nikita Kucherov and Bryden Point, a replacement for injured Tampa Bay defenceman Victor Hedman.

Feaster, who worked for the Lightning from 1998 to 2008, returned to Tampa in 2014 to lead the club's youth and high school outreach efforts after a stint as GM of the Calgary Flames.

While he always felt the region had the potential to thrive as a hockey market, Feaster said the growth of the sport locally in the years since the community-minded Vinik took control of the team in 2010 has far exceeded his expectations.

In the two seasons following the Lightning's latest appearance in the Stanley Cup final, the number of youth hockey players in the Tampa Bay area increased by 747 kids, up from a base of about 1,000.

"Jeff has done such a tremendous job of growing the brand, and the hockey team has helped, too," Feaster said.

"As you know, if you're not winning, the mustard isn't yellow enough in the building," Feaster added. "It's the team. It's what Jeff puts into the community. ... It truly is exponential growth."