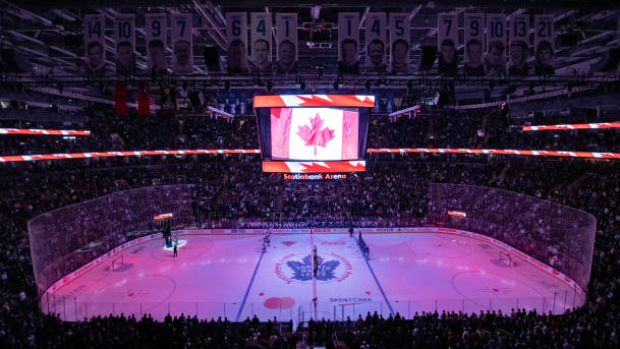 It appears the Stanley Cup will be handed out on Canadian soil for the first time since 2011.

That’s cause for celebration, even if there will be no fans in the arena and a Canadian-based team might not be playing for Lord Stanley’s chalice.

After a marathon bargaining session that stretched into the wee hours of Wednesday morning, the NHL and NHL Players’ Association appear to have a framework in place on a deal to restart the season in late July.

The deal, which is not finalized, would encompass the full scope of the Return to Play tournament, plus a multi-year extension on the Collective Bargaining Agreement and the necessary financial and salary cap transition rules.

Toronto and Edmonton are expected to be the two selected hub cities to host the NHL’s 24-team play-in and Stanley Cup playoffs, barring any last minute changes in the process. That is a distinct possibility, given the fluidity of the situation and the fact that two previous frontrunners in Vegas and Vancouver have fallen by the wayside.

Plus, there is always the potential for fireworks that blow the whole thing up with these two sides negotiating gritty details and a laundry list of items still to iron out.

Once a deal is finalized, it will require ratification votes from both the NHLPA’s full membership and the NHL’s Board of Governors, which could come as soon as this weekend. A simple majority vote is needed from the NHLPA; a two-thirds vote is required from the BOG.

The 12 Eastern Conference teams would be scheduled to report to Toronto, while the 12 Western Conference clubs would play in Edmonton. Both of the ‘home’ teams would also be required to stay in a hotel inside the league’s designed ‘bubble,’ removing any potential ‘home-ice’ advantage in games played in empty buildings.

This year, the Stanley Cup truly would live up to the ‘toughest trophy to win in sports’ moniker. After the 16 playoff teams are decided by a best-of-five play-in series, the winner will be required to run the gauntlet in the usual four-round, best-of-seven climb - all while living in the same restrictive bubble for a period of upwards of 65 days.

There is nothing easy about that - or the grim financial realities if hockey did not return to conclude the season.

There is significant financial risk involved for both sides moving forward. Not being able to award a Stanley Cup champion would result in the loss of $1.1 billion in total revenue for this season; this tournament could recoup a total of upwards of $450 million.

Proposed terms of the three or four-year CBA extension included a frozen salary cap for next season at $81.5 million that is de-linked from revenue projections, with escrow withholding for players capped at a maximum of 20 per cent to begin the deal, as players begin to pay back to owners a massive debt from revenue lost during the COVID-19 pandemic.

The proposed CBA extension also includes the NHL’s return to the Winter Olympics in Beijing 2022 and Milan 2026, pending negotiations with the International Olympic Committee, and likely a defined international hockey calendar.

While bending in a significant way on the economic model, the NHL’s players were also expected to gain small lifestyle benefits in the new agreement, including round-trip first class airfare for spouses to/from club cities to start/end each season, increased rental/mortgage reimbursement after a trade or reassignment, and increases in medical subsidies in retirement and player health insurance.

Also included in the proposal is the option for players not to participate in the hub city return-to-play if they choose not to do so.

The NHL and NHLPA were believed to still be grappling on potentially thorny issues on Wednesday, including proposed limits on contract structures and signing bonus limitations. The NHL sought to cap signing bonuses at a maximum of 50 per cent of total salary because bonus-laden deals became a vehicle to protect player earnings against a buyout.

Much of the dealing came down to the wire.

It wasn’t until Tuesday night - just hours before the deadline - that the two sides agreed to extend all contracts due to expire at midnight on July 1.The interim extension will now include the return-to-play tournament with a free agency period to follow, likely in October or November.

As of Tuesday, teams had still not been advised of a critical dates calendar for the fall and beyond, which would include the next phase of the draft lottery, the draft itself, and free agency and arbitration details.

The NHL and NHLPA agreed earlier in the day to honour all signing bonus money due to players on July 1, which accounts for more than $300 million USD in one-day payments.

The players’ union, owners, federal and provincial officials needed to say ‘yes’ to the return-to-play format - and now it is up to the COVID-19 virus to cooperate.

No health expert can guarantee whether restrictions will be loosened in time for fans to return to arenas next season and how society at-large will respond. How quickly and in what capacity will determine when the 2020-21 schedule begins - and how soon the NHL’s players will pay back their large debt to the owners.

This has been among the darkest periods in hockey history, a time filled with uncertainty and fear. There are many questions left to be answered and challenges to be faced.

But for the first time since March 12, we can definitively say hockey will be back soon - if and when the two sides sign on the dotted line.