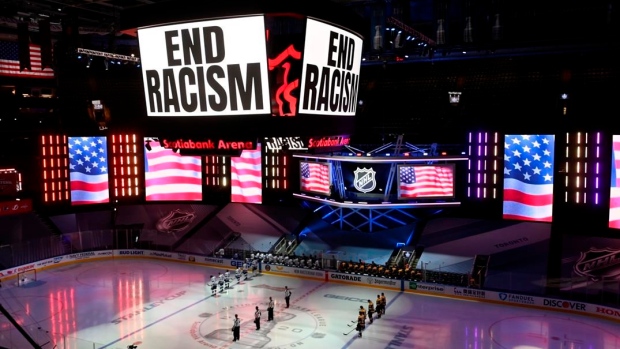 TORONTO — The NHL unveiled a number of anti-racism initiatives Thursday, some eight months after the issue was brought to the forefront.

In conjunction with NHL Players' Association, the league said in a press release it's instituting mandatory inclusion and diversity training for players, while employees will participate in an "inclusion learning experience" focused on anti-racism, unconscious bias, dimensions of identity, micro-aggressions and cultural competency.

The league and the players added they will work with the Hockey Diversity Alliance to establish and administer "a first-of-its-kind grassroots hockey development program to provide mentorship and skill development" for Black, Indigenous and children of colour in the Toronto area. The parties have also agreed to pursue a similar pilot program in the United States.

Former NHL player Akim Aliu brought the issue of racism in hockey to the forefront in the fall when he alleged Calgary Flames head coach Bill Peters used slurs when both were in the minors a decade ago. Peters subsequently resigned, while Aliu addressed the league's board of governors in December.

Thursday's announcements by the NHL and NHLPA come after a period of reflection and conversation across hockey — a predominantly white sport — and around the world.

Players from the eight teams remaining in the league's restart to its pandemic-delayed season decided last week to postpone two days of playoff games following the police shooting of Jacob Blake, a Black man, in Wisconsin on Aug. 23.

The NHL was criticized for going ahead with its full slate of games last Wednesday after NBA players triggered a boycott that spread across Major League Baseball, Major League Soccer and professional tennis.

The Hockey Diversity Alliance, which was co-founded by Aliu and San Jose Sharks winger Evander Kane, called on the NHL to halt its schedule after Blake was shot seven times in the back and left paralyzed.

NHLers subsequently decided against playing last Thursday and Friday after a series of meetings and conversations with Black and minority players, as well as the members of the HDA.

"We applaud NHL players for recognizing the importance of this moment and for coming together as part of a genuine movement for change," Bettman said in the statement announcing the new initiatives. "We look forward to working with all voices of change to fight for equality and broaden access to the game we all love."

In the aftermath of the boycott, players spoke of using their platform to help drive change and shine a light on systemic racism, social injustice and police brutality.

"Everyone should be able to live and work in an environment that is inclusive, and one that is free from racism and discrimination in any form," NHLPA executive director Don Fehr added. "From the NHL to youth programs, we must take actions to achieve that goal, and to make our sport available and accessible to all."

Among the other initiatives announced, the league said it has begun conversations with the aim of building a more diverse business pipeline and identifying strategies to engage more minority-owned organizations.

Thursday's developments come after the HDA listed off a number of concrete steps it would like to see from the NHL, including a commitment to fund to grassroots programs for minorities, funding for impactful social justice initiatives, anti-racism education, targets for promoting Black individuals and businesses, and rule changes to make the culture of the game more inclusive.

"It's very reasonable," Colorado Avalanche centre and HDA member Nazem Kadri said last week of those requests. "We want the NHL to understand that this is a partnership, a collaborative effort to create sustainable change. It's gonna have to be the whole league, it's gonna have to be collectively. Not just one or two guys. Strength in the numbers is key.

This report by The Canadian Press was first published Sept. 3, 2020.