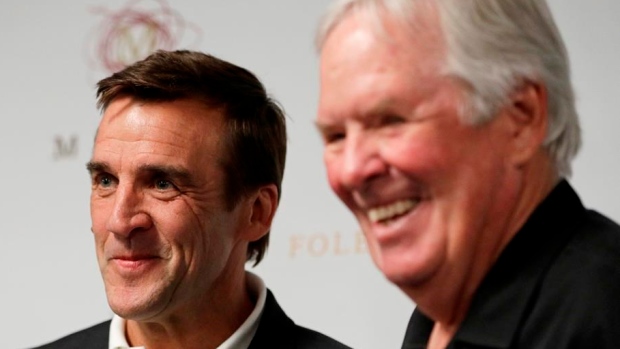 The U.S. Army’s Golden Knights Parachute Team has broken nearly 350 world records in competition, but now they’re broken up about the use of their nickname by the NHL’s newest franchise.

The Army is “reviewing” their options to potentially contest the Vegas Golden Knights nickname, a spokeswoman told the Fayetteville (N.C.) Observer.

However, the NHL remains confident that the Golden Knights name will stick.

“We are very comfortable that the right things were done in preparation for this announcement, and that the use of the name Golden Knights for our franchise in Las Vegas will neither cause confusion in the marketplace, nor run into significant legal entanglements,” NHL deputy commissioner Bill Daly said Tuesday.

The NHL’s 31st team was dubbed the Golden Knights by owner Bill Foley on Nov. 22 in a gaudy reveal party that was marred by a technical error.

The Golden Knights beat out the Desert Knights and Silver Knights. Foley, a U.S. Military Academy graduate, openly preferred to name his $500 million expansion team the Black Knights — the nickname used by the academy’s athletics teams — but ran into roadblocks from both the Pentagon and his alma mater.

Instead, Golden Knights was chosen, along with a dominant colour scheme similar to Army’s Black Knights. Foley called it “the next best thing.”

But Alison Bettencourt, public affairs chief of the Army’s Marketing and Research Group, said the military is “reviewing the situation and figuring out what the way ahead would be.”

“We understand that one of the Las Vegas team owners has Army connections, and will likely understand our interest in this announcement is meant to protect the proud history of the Army's Golden Knights and their vital role in telling the Army story and connecting America with their Army,” Bettencourt told the Fayetteville Observer, the paper of record where the parachute group is based at Fort Bragg.

Foley said that he had asked for permission first from Clarkson University, also named the Golden Knights, but apparently did not clear his name choice with the Army. Bettencourt told the paper that the Army first learned of the Golden Knights name when it was revealed on Nov. 22. The two sides have not had communication since.

A spokeswoman for the Vegas Golden Knights group could not immediately be reached for comment on Tuesday.

Foley was aware of the Golden Knights Parachute Team since he reportedly asked for them to perform at his team’s naming party.

“We wanted to have the Golden Knights drop in for the ceremony, but it got kind of complicated,” Foley told the Las Vegas Review-Journal.

According to the Washington Post, Army spokeswoman Bettencourt said a non-profit organization sent a request to the Golden Knights Parachute Team on Oct. 31 asking for them to make an appearance on behalf of a professional sports team. Because of its ties to an unnamed for-profit entity, the request was “immediately denied.”

The request likely came from The Folded Flag Foundation, a non-profit charity run by Foley that pays university scholarships and grants to the spouses and children of fallen U.S. military personnel. Foley’s Folded Flag Foundation had a presence at the team’s naming ceremony and handed out literature.

Foley’s group filed an application to trademark the “Vegas Golden Knights” word mark on Aug. 23, 2016, according to the United States Patent and Trademark Office. That application is still awaiting full approval; it has been accepted for meeting the minimum filing requirements but has not yet been assigned to a trademark examiner.

The Army has not trademarked “Golden Knights,” however it could stake claim to the trademark since it has been in use since 1962. Their insignia also includes a knight’s helmet, like the Vegas Golden Knights.

The United States Army Parachute Team, established in 1959, has gone by the nickname of the “Golden Knights” since 1962 because of the gold medals won in competition, while “Knights” alluded to the team’s ambition to conquer the skies, according to the group’s website.

Along with the Navy’s Blue Angels and the Air Force’s Thunderbirds, the Golden Knights are one of three U.S. Department of Defence-sanctioned aerial demonstration teams. They’ve conducted more than 16,000 shows in all 50 states and 48 countries, reaching an average of 60,000 people per show. To date, they’ve won more than 2,148 gold medals in competition.

The Vegas Golden Knights will seek their first win on the ice next October, should their name and trademark prove to not infringe on the U.S. Army.