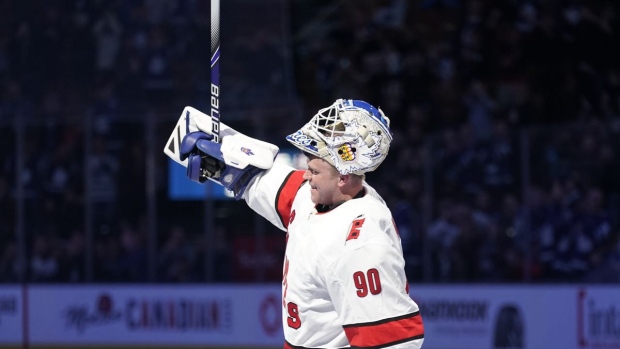 BOCA RATON, Fla. — Any fear that the National Hockey League was set to be the fun police when it comes to the emergency backup goaltender (EBUG) procedure has been proven unfounded. The law on the books will remain as written.

The dreams of EBUGs everywhere are alive. There will be no Ayres amendment.

After deliberating on Monday to kick off their annual meetings, the opinion of the majority of general managers is that they believe the current EBUG procedure is working as intended. Cooler heads prevailed.

“Our managers are fine with where we’re at on it,” NHL senior executive vice-president Colin Campbell said. “I think the process works. It’s only the second time that it’s happened since we discussed [the procedure] more completely [in 2015].”

Campbell said both of the GMs – Kyle Dubas and Don Waddell – affected when David Ayres was forced into action for the Carolina Hurricanes in Toronto on Feb. 22 explained their view of the situation.

Campbell didn’t exactly hide his own thoughts. He pleaded for one of the injured Petr Mrazek or James Reimer to return to the net after watching Ayres allow two goals on his first two shots faced.

“I called Don Waddell after the second period and said, ‘Can’t one of those two guys please come back?’” Campbell said.

But Campbell came around: “It was a good human-interest story.”

Ayres has become one of the best stories of the hockey season. Recognizing that everyman factor, the one that brought Ayres and the NHL into the mainstream south of the border, plus the rarity of the situation, reduced the impetus for change.

NHL executive vice-president Gary Meagher gave a presentation to the GMs on the league’s history of emergency backups – a provision that extends all the way back to 1917, the year the league was founded – and showed that only two EBUGs have seen game action in the 55 years since rosters were mandated to include two goalies.

That’s two EBUG appearances – Ayres and 36-year-old accountant Scott Foster, who shut out the Winnipeg Jets for the Chicago Blackhawks in 2018 – in more than 6,200 games since the NHL formalized the current EBUG protocol in 2015.

The NHL is willing to take their chances if lightning strikes a third time.

“I know there’s been some coverage that we were going to take the fun out of it and there was no discussion of that,” Meagher said. “I think everyone recognized the coverage and how positive it was and the fact that it’s only happened twice.”

Meagher said that the NHL currently has 136 goaltenders that have been pre-approved to serve as EBUGs this season.

Each team is mandated to have one EBUG in the arena for each home game. They must be an amateur with no prior professional experience and can’t be team employees, so goalie coaches or a front-office employee like Martin Brodeur is ineligible.

Meagher said it’s possible that more teams will choose to conduct annual tryouts for EBUGs prior to the season, like the Los Angeles Kings and four other teams did last August.

But the NHL’s GMs had no appetite to enact standards as far as playing experience or age – and they had no interest in adding a non-roster third goaltender to the travelling party.

“I think the key take out is this: It has happened twice, but it doesn’t mean something isn’t running in the background,” NHL vice-president and goaltending guru Kay Whitmore said.

Whitmore said that the moment a goaltender leaves the game with an injury a call is made from the Situation Room to Central Registry. Central Registry then passes along the name of the EBUG that is preapproved to dress.

“He’ll be in the dressing room. You never see it because it never happens,” Whitmore said. “We don’t march them out to the bench because he has to be ready to play for both teams.”

Whitmore stressed: “Don’t judge a book by its cover.”

“These guys are practice goalies, they see NHL shots,” said Whitmore, a nine-year NHL netminder. “Just because I played pro 18 years ago doesn’t mean I’d be as good as that guy. That’s why the managers think, ‘Hey, it works the way it is for now.’ You know, it was a good discussion, but let’s leave it alone.”