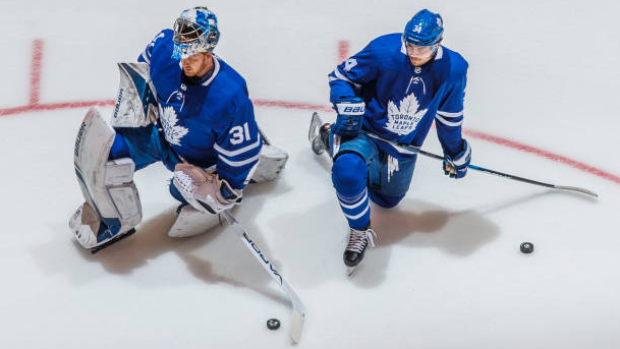 The veteran centre for the Toronto Maple Leafs has been a creature of habit throughout his career — one where he rarely goes a day or two without hitting the ice during the season.

That's why Spezza isn't a fan of the NHL's move to include a bye week for rest and relaxation on either side of the all-star break.

"I don't love it," said the 36-year-old. "I'd prefer to sprinkle the (time) throughout the season and have some longer gaps where would practice a little bit.

"But guys seems to like it, seems to be a popular thing. I'll take it and use the rest. I prefer not to have it, but that's just my own take."

The Leafs are one of 17 teams to get their bye ahead of this weekend's NHL all-star game, which will give them a total of eight days off between games before resuming the schedule Jan. 27.

The other 14 teams' bye week comes after the all-star festivities in St. Louis.

Toronto captain John Tavares likes the break as teams prepare for a final push with roughly 30 games to go.

"I enjoy it," he said. "The time of year we want to play to takes a lot of effort, a lot of energy and a big commitment."

But there's plenty of debate about the bye's merits.

While some point to the rest players receive, others argue adding a week off actually has the opposite effect because the condensed schedule sees more back-to-backs and three games in four nights.

Teams also have a history of struggling immediately after the bye — first introduced in 2015-16 — although the NHL has tweaked things in recent years so that as many clubs as possible face an opponent in the same boat after the hiatus.

"Selfishly you'd love to practice a little more," Chicago Blackhawks head coach Jeremy Colliton said of the pros and cons of the bye. "The challenge is more how you make use of the time you have and do it more efficiently than everyone else.

"To get yourself ramped up again physically might be a challenge, but the quality of play after the bye week — once they get the kinks out — is better."

"We'd all rather keep playing," he said. "You look at statistically how teams are (after) the bye week, I don't think anybody's particularly enamoured with it."

Chicago captain Jonathan Toews, whose club has won five of its last six to creep closer to a playoff spot, said the bye can kill momentum.

"The all-star break would be almost sufficient," he said. "We're playing good hockey. You want to keep that going when you're in a groove."

Ottawa Senators defenceman Dylan DeMelo said getting back in the swing of things right after everyone returns from warmer climates can be tricky.

"If you're on the beach somewhere it might be hard to leave," he said. "But at the end of the day, we all love playing the game."

Montreal Canadiens forward Tomas Tatar added the ability to get healthy trumps any worry about a sluggish return.

Ilya Kovalchuk, who recently signed with Montreal after parting ways with the Los Angeles Kings, joked the bye couldn't come at a worse time.

"I don't need that break!" he said. "But I'll take it, spend a little time with my family."

Vancouver Canucks winger Brock Boeser said the benefit for him is between the ears.

"To mentally reset is the biggest thing," he said. "There are days when you come to the rink where maybe you are more tired mentally than physically."

Vancouver defenceman Tyler Myers said that while he likes the break, there's a simple solution to alleviate the condensed schedule if bye weeks are the new norm.

"I'd be fine starting the season a little bit earlier," he said. "I don't think training camp needs be as long as it is."

TOCCHET WITH A ZINGER

Arizona head coach Rick Tocchet was named as the all-star game bench boss for the Pacific Division after the Vegas Golden Knights fired Gerard Gallant last week. Canadian and American female players are taking part in a 3-on-3 game Friday as part of the festivities, and Tocchet got a jab in at Coyotes winger Phil Kessel, whose sister Amanda will suit up for the U.S., ahead of the showcase. Quipped Tocchet: "I might try to coach the women's teams so there's the one Kessel that will listen to me."

From the outside, this was supposed to be a down year in Columbus. The Blue Jackets lost two-time Vezina Trophy winning goalie Sergei Bobrovsky, sniper Artemi Panarin and star centre Matt Duchene in free agency. But heading into Wednesday's home game against Winnipeg, Columbus is a league-best 15-2-4 since Dec. 9 to occupy an Eastern Conference playoff spot. Bobrovsky signed a seven-year, US$70-million contract with Florida on July 1. Meanwhile, the three goalies to suit up for the Blue Jackets this season — Joonas Korpisalo, Elvis Merzlikins and Matiss Kivlenieks — will combine to earn less than $3 million in 2019-20.

-With files from Jim Morris in Vancouver, Kelsey Patterson in Montreal and Lisa Wallace in Ottawa.

This report was first published by The Canadian Press on Jan. 22, 2020.