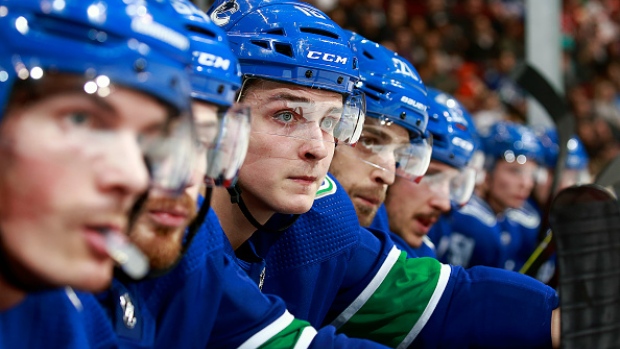 Vancouver Canucks general manager Jim Benning is looking to upgrade his top-six this summer with scoring winger, but he's not willing to part with young pieces to do so.

Ben Kuzma of The Vancouver Province reports the Minnesota Wild offered Jason Zucker to the Canucks earlier this off-season for Brock Boeser and were quickly turned down.

“I’m looking to add support for our young players so they can keep developing and get to another level,” Benning told Kuzma this week. “The thing I’m up against when I talk to other teams is they all want our best young players. I’m trying to rebuild and we’ve got pieces in place.

“They’re going to be our core group, so I’m not interested in moving them out.”

Kuzma writes that Boeser, Bo Horvat, Elias Pettersson and Quinn Hughes are untouchable on the team's roster and, while Benning appeared to add more names to that list, he also left the door open to parting with a former first-round pick.

“Thatcher Demko is a part of that (untouchable) group and Olli Juolevi has had injury problems, but has the ability to be a very good player for a long time,” Benning said. “If I have to package guys I will, but I think Jake (Virtanen) is an important player for us. You have to be patient with this type of player and the power forward game he plays.

“You watch the playoffs and you see the size, strength and speed and as he continues to mature, he’s going to be a valuable guy. That’s not saying I wouldn’t move him, but it would have to be a good deal to include him.

“If we could add somebody to pay with Pettersson and Boeser or somebody to play with (Tanner) Pearson and Horvat - depending on what it takes - we’ll look at it.”

Kuzma wonders if Benning could look to move restricted free agent defenceman Ben Hutton this summer for forward help. He adds the team could package Hutton with Virtanen, who had a career-high 15 goals and 25 points last season, in a deal for a top-six winger.

The Canucks enter the off-season with $30 million in cap space (on a projected $83 million salary cap) with nine restricted free agents, including Boeser, and three unrestricted free agents on their roster. Kuzma notes the Canucks are also interested in adding a right-hand shot on defence this summer and can't afford to fill both their top-six need and hole on the blueline in free agency.

The Toronto Maple Leafs off-season is already off to a busy start with defenceman Nikita Zaitsev requesting a trade and the team opening trade talks on veteran Patrick Marleau.

TSN Hockey Insider Bob McKenzie believes the team can't afford to part with Zaitsev for a limited return unless they're acquiring a NHL-ready defenceman back. McKenzie believes that beyond a list of untouchables, Leafs general manager Kyle Dubas has plenty of options when it comes to trading for help on the blueline.

"They’re not going to give Zaitsev away, or if they are going to give him away in a soft deal, then obviously there has got to be a corresponding other move that would bring in an experienced defenceman to pick up his minutes, but that can be accomplished in a lot of different ways," McKenzie said on TSN Radio 1050 Toronto.

"If you’re looking at the Leafs, you kind of have to look at it globally and say, 'Don’t look at the Marleau situation by itself or Zaitsev situation by itself. Look at the big picture.' And the big picture is that in terms of pure untouchables on the Toronto Maple Leafs, you’ve got John Tavares, Auston Matthews, Mitch Marner assuming he gets a contract signed, and you’ve got Morgan Rielly. Those are the four guys who are the core untouchables. I would put Frederik Andersen and William Nylander in the next grouping and suggest that the Leafs don’t want to trade these guys and probably won’t and it’d have to be a hell of an offer and a hell of a fit for them to do something like that.

"After that, it is basically a wide open table. Kyle Dubas and the Leafs can’t afford not to consider all of their options. Whatever the deal for Zaitsev is, or whatever the deals for Marleau may or may not be, he has got other pieces. He’s got (Nazem) Kadri. He’s got Connor Brown. He’s got Andreas Johnsson. He’s got Kapanen. He is getting, I’m sure, lots of calls on lots of players. I would especially think, in the case of Kadri and Kapanen, he’s got two guys they’d get tons and tons of calls on.

Zaitsev, 27, is signed for five more seasons at a $4.5 million cap hit, while Marleau, who has a full no-move clause, is under contract through next season at $6.25 million.

"It’s pretty clear that the guy driving the bus on this entire thing is Patrick Marleau and his agent, Pat Brisson," McKenzie added of the trade talks involving Marleau. "That is where this is being orchestrated. Now, do the Toronto Maple Leafs want to get rid of the third year of his contract paying him $6.25 million and allocate the dollars someplace else? Yes, they would. But it’s not a coincidence it was the L.A. Kings the Leafs were talking about or the Arizona Coyotes because ultimately the Leafs can’t do anything without Marleau signing off on it.

"This is not a conventional thing where the Leafs say, 'Oh, we’ve got this final year of Marleau’s contract and we’d like to get rid of it. Let’s talk to teams around the NHL.' You don’t even go through that exercise because Marleau has got a full no-move and a full no-trade and he is not going anywhere he doesn’t want to go."

San Jose Sharks captain Joe Pavelski said Tuesday he remains hopeful that he will reach a contract extension with the team before reaching unrestricted free agency on July 1.

“I am still optimistic, we have had a little bit of talks, so hopefully things keep moving forward and go from there,” Pavelski told The San Jose Mercury News. “Things can change in a hurry. The discussions are kind of going on right now and we’ll see how they work out. But definitely optimistic. Definitely love it there and we’ll see where it goes.”

Pavelski, 34, scored 38 goals and posted 64 points in 75 games this season. He was limited to 13 games in the post-season due to injuries, including hand surgery, but still managed to post four goals and nine points.

The Sharks have a projected $24.7 million in cap space this summer with seven unrestricted free agents and four restricted free agents. Curtis Pashelka of The Mercury News writes the Sharks ability to retain Pavelski could come down to whether Erik Karlsson re-signs with the team. The Ottawa Sun reported Tuesday that Karlsson will be looking for offers from the Ottawa Senators and Montreal Canadiens since his wife, Melinda, would like to move closer to home.

Pavelski has spent his entire with the Sharks after being drafted by the team in the seventh round of the 2003 NHL Draft. He is coming off a five-year, $30 million contract.