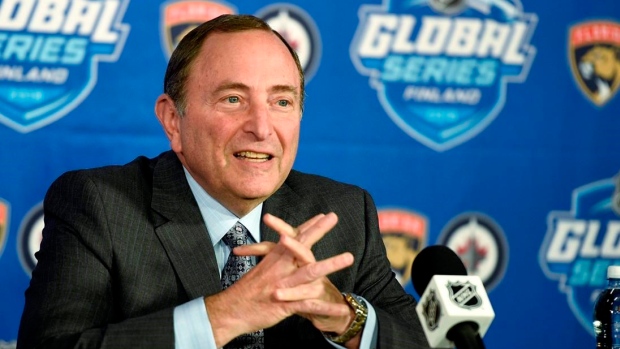 Exactly 75 days after pause was pressed on the season, the NHL became the first major North American pro sports league to unveil its formal return-to-play plan on Tuesday.

There is no guarantee the NHL makes it back to complete this season, but there is a plan. Bettman outlined the 24-team format, details on the Draft Lottery, and the official conclusion of the 2019-20 regular season.

“We hope this is a step back towards normalcy,” NHL commissioner Gary Bettman said.

Here is all of that information and more boiled down into some FAQs:

> When will the NHL return to the ice?

For the first time, Bettman revealed a best-case timeline. He said training camps will begin “not earlier than the first half of July.”

Players have asked for a three-week training camp. If that request remains intact after they begin training in small groups next month, then the earliest the puck can drop is in late July or early August.

“We view this more as a continuum than absolute dates, because anyone that is giving you dates is guessing,” Bettman said. “It’s conceivable that we’re playing at the end of July. Maybe things open up quicker. If it has to slide more, then it will slide.”

The top 12 teams in each conference will compete in either a seeding round-robin or a qualifying (“play-in”) round to determine the 16 teams that will ultimately compete for the Stanley Cup.

The remaining eight teams in each conference will play a best-of-five series to advance to the first round of the playoffs, using overtime rules.

The format of the first and second rounds of the playoffs is still to be determined. The NHL and NHL Players’ Association are negotiating on whether it will be best-of-five or best-of-seven series, plus whether it will be a bracket format or seeding.

The Conference Finals and Stanley Cup Final will both be the usual best-of-seven series. 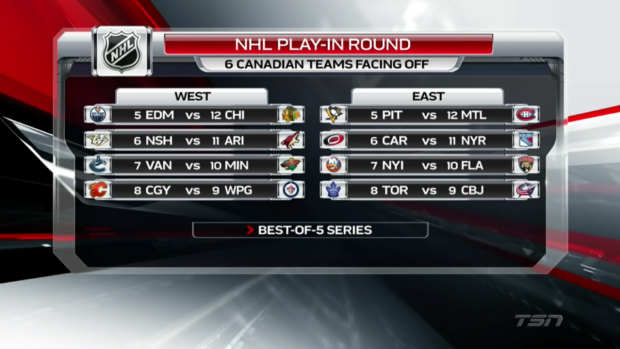 > How will the top four seeds be determined?

The top four teams will play a three-game round robin that will determine their seeding and first-round matchup.

It will be possible, Bettman conceded, that the current No. 4 seed Philadelphia Flyers end up as the No. 1 seed in the East to begin the playoffs - even though they finished 11 points behind the Boston Bruins, the best team in the East - and the entire league - in the regular season.

Only in the event of a round-robin tiebreaker will regular season points percentage impact the seeding. This format came as a result of top-four teams not wanting to be at a disadvantage with a bye.

“They needed some games that mattered, to not be coming in against a team that just played a competitive series,” Bettman said. “The benefit and the curse of a bye, I suppose.”

> Where will these games be played?

Each conference will be assigned a “hub” city that is designed to operate as a bubble for players and team personnel, with secure hotels, arena, practice facilities and in-market transportation.

Bettman also said that it remains possible for the Conference Final and Stanley Cup Final to be played in the cities of the teams that are competing.

> Three of the NHL’s 10 hub city candidates are in Canada. Will Canada be home to one of the host cities?

The current federal 14-day mandatory quarantine for all persons entering Canada is presenting a roadblock.

“We would certainly like to have a city in Canada,” deputy commissioner Bill Daly said. “We’re in discussions with the Canadian government at this point in time on that issue. If we’re not able to resolve or solve that issue, I think it effectively eliminates our ability to come to a Canadian city as one of our hub cities.”

Bettman said the NHL has three or four weeks to decide on hub cities. That may be enough time to find a creative solution or see restrictions loosened in that time, something that the NHL would certainly be interested in given the costs to resume play and a favourable Canadian dollar exchange rate for the league.

> Would teams be barred from playing in their own hub city?

To be determined. Without fans in the stands, there may not be much of a “home-ice advantage,” but the league is sensitive to potential competitive advantages of using their home base.

“We certainly see some merit to moving the club to a different market,” Daly said, “so any perceived advantages associated with being in a home market are eliminated.”

Added Bettman: “If a team happens to be the home market, I don’t think the players should be planning on [staying at] home. They’ll be staying in the same [hotel] conditions that everybody else is.”

Tuesday was good news for the Ottawa Senators, who will have a combined 25 per cent shot at the No. 1 pick and Alexis Lafreniere when the Draft Lottery is held on June 26.

The Draft Lottery rules are complicated. But all 15 non-playoff teams - including the eight teams that lose in the qualifying round tournament - will have a chance at the first, second and third overall picks.

Since the eight teams who lose in qualifying are involved, a second phase of the Draft Lottery may be required. If one of those eight teams wins one of the first three lotteries, a second lottery will be held - with equal odds assigned to each team - to determine which one of those teams will win the pick.

The NHL said that the Draft itself will take place after the Stanley Cup is awarded.

The NHL said it nixed the idea of a Draft in June because it gave the most weight to teams who said it would limit their ability to “use the draft as a jumping-off place for performing a roster reset” because it limited their “trade market associated with active players.”

> What about those seven teams whose seasons are finished?

The lights have been turned out on the 2019-20 season for Ottawa, Detroit, Los Angeles, Anaheim, San Jose, New Jersey and Buffalo. It’s the first time all three California teams have been shut out of the playoffs since 1996.

In Buffalo, a ninth straight season outside of the playoffs might mean that the Sabres potentially go nine months without playing, since Bettman confirmed that next season may not begin until January.

For GM Jason Botterill, whom owner Kim Pegula confirmed on Tuesday is returning for a fourth season, and the other six GMs, that might present a stiff challenge.

There will be the excitement of the Draft Lottery, then perhaps a long lull until next season.

Daly said that the NHL might develop a different type of off-season plan for those seven teams - whether it’s allowing them to open training camp earlier than the 24 teams that have played, or even potentially playing exhibition games among themselves.

“We’re dealing with a lot of issues now, but we’re going to be sensitive to issues like the [long off-season] competitively,” Daly said. “There may very well be different off-season rules because we’ve never been in this type of situation before - and unique situations sometimes necessitate unique measures. We’ll see how to approach that.”

> What does that mean for the 2019-20 regular season and statistics?

The 2019-20 regular season has been completed for all record-keeping purposes. That means that the Boston Bruins have captured the Presidents' Trophy with 100 points; Alex Ovechkin and David Pastrnak will share the Rocket Richard Trophy with 48 goals; and Leon Draisaitl will be the league’s scoring champion and Art Ross winner with 110 points.

Ovechkin was robbed of the chance of a ninth career 50-goal season, but this is his ninth Rocket Richard. This is the first time the Richard Trophy will be shared since 2009-10, when Sidney Crosby and Steven Stamkos split it.

It has not yet been determined how the round-robin or play-in round stats will be kept. The NHL made it clear on Tuesday that those games will not count as playoff games.

Bettman reiterated that the NHL is planning for a 2020-21 season that is “full in all ways,” one that includes 82 games and fans in arenas.

“Our hope and expectation is we’re going to be doing it from the start, which will be later with people in the building,” Bettman said. “There is no magic to starting in October.”

Bettman even hinted that the NHL could start next season with the Winter Classic, played on New Year’s Day, if necessary.

> Does that mean the unique 2020-21 season could begin a new way of life for the NHL schedule as we currently know it?

Bettman did not rule that out.

“That experience may give us some more information and data points to make decisions going forward,” Bettman said. “There have been a number of our colleagues who have over the years suggested we should start in October. What we’re learning through this time, which is not quite normal, is that there may be some flexibility in terms of the timing with which we schedule the season. We’re about to learn.”

> What has been the financial toll of COVID-19 on the NHL?

Bettman admitted that the pandemic has had a “severe” impact on business. By returning to play, sources indicate the NHL and NHLPA have the potential to recoup approximately $400 to $450 million in gross revenue out of a possible $1.15 billion loss.

“There has been no revenue coming in and expenses are still there,” Bettman said.

Bettman conceded that NHL owners are “probably not as wealthy as they were 12 weeks ago,” but vowed hockey “will come back as strong, if not stronger.”

> How will COVID-19 testing work for players?

Daly said the NHL’s testing will ramp up considerably as the league moves from players skating in small groups to training camp to players arriving in their hub city.

> Will a player testing positive for COVID-19 derail the NHL’s tournament?

No, according to the NHL.

“One single positive test, depending on the test, should not necessarily shut the whole operation down,” Daly said. “We can’t be in a situation where we have an outbreak, that will affect our ability to continue playing.

Bettman said that the NHL will require 25,000 to 30,000 tests to return to play. He reiterated that those tests cannot come at the expense of public supply, but does not believe that will be an issue.

Expect a March Madness-style of schedule, at least in the first few weeks of the NHL’s return to play, with games at all hours of the afternoon and late into the night.

“I think the fact that with no travel associated at all that we can safely schedule some back-to-back [games],” Daly said. “We’re not going to overload these playoffs with back-to-backs, but I think it’s certainly reasonable in the first several rounds of the playoffs, maybe even in the conference finals.”

Daly said one of the objectives from the NHLPA was to “make it as quick as possible” for the players who may be isolated from their families. If the players are willing to play the first two rounds in a best-of-five format instead of the traditional best-of-seven, Daly said it would shave more than a week off the schedule.

Daly said: “We felt from an overall health perspective, the sooner we can go in and get out, the better.”

Like so many facets of the NHL’s return to play format, that, too, remains up in the air.