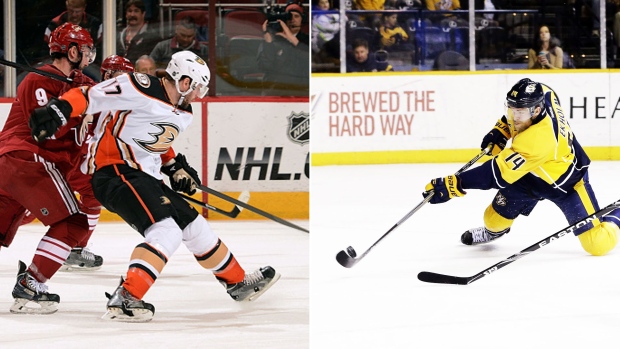 Kesler vs. Ekholm , The Canadian Press

The NHL Play of the Year showdown continues today with a couple players taking matters into their own hands.

The third match-up of the Round of 16 pits Anaheim Ducks power-forward Ryan Kesler against Nashville Predators young defenceman Mattias Ekholm.

Ekholm may lack star-power, but it doesn't dim the incredible determination he displayed.

The 24-year-old defender rushed into the Montreal Canadiens zone, seeing an opening between three defenders. Despite drawing a hook from Tomas Plekanec and falling to the ice, the young Swede managed to get under a backhander and flip it just over Carey Price's shoulder.

Kesler's tally was a stellar shorthanded effort as he slithered between a pair of Coyotes and then snapped the puck past Mike Smith, all of this happening with Sam Ganger basically hanging off his back.

Ekholm got past superstar Sidney Crosby while Kesler beat the equally talented Alexander Ovechkin in the Round of 32.