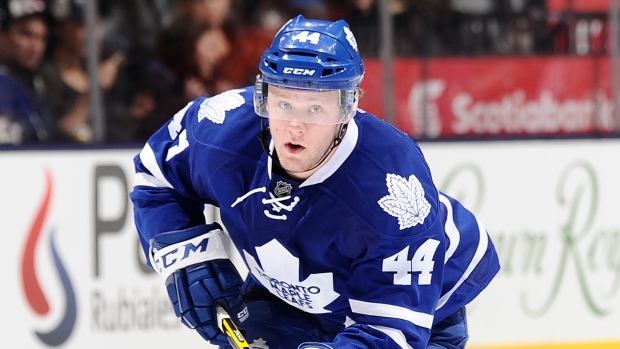 The NHL Play of the Year showdown continues today with a Maple Leaf stud facing a masked man.

The second match-up of the Round of 16 has young D-man Morgan Rielly squaring off against Flames goalie Karri Ramo.

Rielly announced his presence as a two-way threat against the Edmonton Oilers with authority.

The 21-year-old blueliner led the Leafs rush into the Oiler zone and fought off three furious stick-check attempts before toe-dragging across the slot to get an open look for a shot. His finish, too, was a thing of beauty as he picked the top corner over Viktor Fasth to earn his place on the highlight reel.

Ramo's effort, on the other hand, was just as improbable as the Calgary Flames season.

After a gift of rebound, New York Rangers forward J.T. Miller one-timed the puck, most likely preparing for the celebration that would soon occur with his blue-shirted teammates. That was until Ramo decided he didn't want any part of that visual and reached back to make the sprawling glove save to put the Madison Square Garden crowd back into their seats.