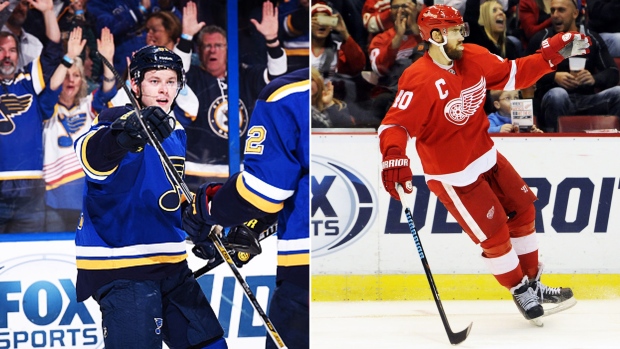 Tarasenko vs. Zetterberg , The Canadian Press

The back end of the second round of the NHL Play of the Year goes today with a Russian sniper, in his second appearance, taking on a veteran Swede.

The fifth matchup of the Round of 16 sees Henrik Zetterberg and Vladamir Tarasenko going head to head.

Zetterberg's effort comes to us from the trick-shot discipline.

The Red Wings captain seemed to be looking for the open man in the crease when he cycled behind the Nashville Predators' net. He caught everyone by surprise, however, by ricocheting a shot off the back of Preds netminder Marek Mazanec. Not just off Mazanec, however, as the shot hit the keeper's shoulder, then the back of his head, then the crossbar before finding the white ice.

Tarasenko's effort was memorable enough that it's his second entry into the POY showdown.

Just days after his first headline-maker, Tarasenko barreled over the blue line into a trio of New Jersey Devils defenders. All the Devils furiously whacked at the Russian sniper with their sticks, but he still managed to punch through. Once clear, he waited out netminder Cory Schneider with another deke, to finish the play over his outstretched stick.

Tarasenko handled Bobby Ryan and Zetterberg defeated Radim Vrbata in the first round.