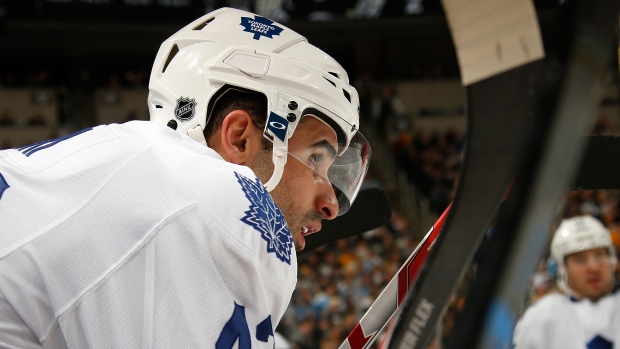 Nazem Kadri’s season could be cut short by a game.

The NHL’s hockey operations department is reviewing a throat-slashing gesture the Maple Leafs centre made toward Flames defenceman Mark Giordano during Tuesday night’s game in Calgary.

Kadri admits he's "probably never" felt more mad on the ice than he did after taking the big hit from Giordano.

"Emotionally, I was pretty frustrated after that hit," Kadri said following Toronto's 4-3 loss. "I mean, I'm not sure if it was a clean hit or not, but I've been told it was, but it certainly didn't feel that way at the time. It felt like I got hit right in the head and I was just kind of furious."

After the play, Kadri returned to the Leafs bench, slamming the door behind him. He went on to make a throat-slashing gesture at Giordano. Does Kadri regret the move?

"Yeah, of course. It's something I don't really remember doing, to be honest," Kadri explained. "I was kind of in and out after that hit, just furious, it was an emotional reaction."

"From what I saw it was a hockey hit," said Leafs head coach Mike Babcock. "He was fired up and that's part of the game, you got to control yourself."

The hit occurred on Kadri's last shift of the first period. Kadri told Dave Feschuk of the Toronto Star that he went through the concussion protocol in the intermission and was deemed fine to return.

"It certainly didn't feel like a good hit and it didn't feel very good at the same time," Kadri said. "It just felt like my head took the brunt of the collision."

The Flames felt the hit was clean with head coach Bob Hartley calling it a textbook bodycheck. "We should teach kids to hit like this," he said.

Giordano labelled Kadri's gesture as "pretty stupid" telling reporters that "a throat-slash (gesture) should not be in the game. The league will deal with stuff like that if they want to."

Kadri ultimately may not be disciplined for the hand signal, but the NHL has previously suspended players for the same.

In 2010, Blackhawks defenceman Nick Boynton was banned from Chicago’s season-opener after he made a throat-slashing gesture following a preseason fight. Boynton was also suspended in 2006 for the identical motion.

The NHL first deemed throat-slashing gesture’s a no-no with a warning to Florida’s Peter Worrell in 2000. It has frequently been outlawed when caught on camera since then.

Kadri was disciplined for the same hand motion during a 2010 World Junior Championship game for Team Canada against Switzerland.