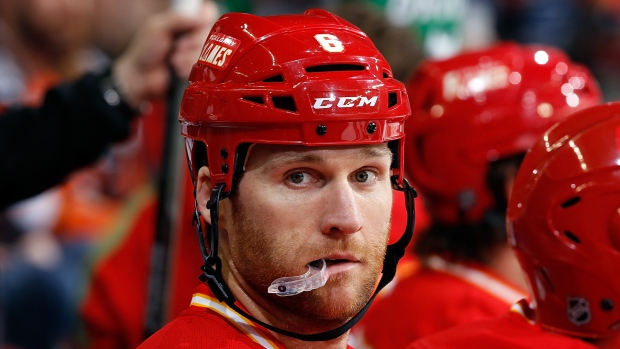 The NHL is reviewing whether or not the Calgary Flames properly followed the league’s concussion protocol with defenceman Dennis Wideman during the Jan. 27 game in which he cross-checked linesman Don Henderson.

The NHL regularly reviews every instance when a concussion is diagnosed, much in the same way any questionable hit or incident is reviewed by the league’s Department of Player Safety.

Teams have previously been fined by the NHL for not following the protocol, though that information is not made public.

In a video explaining Wideman’s 20-game suspension on Wednesday, the NHL acknowledged Wideman was later diagnosed with a concussion. Whether the Flames properly followed the protocol is viewed by the NHL as a separate issue from Wideman’s discipline. The NHLPA has filed an appeal of the suspension on Wideman’s behalf.

“Even assuming the player’s claim that he was disoriented as a result of a [previous Miikka] Salomaki check, Wideman cannot be excused from the nature and severity of the offence he committed on the ice,” the NHL’s explanatory video said. “Wideman must remain accountable for his own actions.”

There is no video evidence available to suggest that the Flames and their medical staff violated protocol.

The NHL said Wideman skated “steadily and purposely toward his bench,” and demonstrated his “continued awareness of his circumstances and surroundings when approaching the Calgary blueline” by raising his stick and tapping it on the ice to “alert his teammates that he is coming off for a line change.”

According to the protocol, even if a league-approved concussion spotter in the building calls down to the bench to alert the medical staff that a player exhibited signs of a concussion - which the spotter reportedly did do in Wideman’s case - that alone is not enough to remove a player from the game.

The NHL’s video said Wideman admitted that he “repeatedly refused immediate medical attention and remained in the game.”

The final decision on a player’s status rests with the medical staff. That decision is a judgment call made by the medical staff based on evidence and apparent symptoms, as well as a conversation with the player. Video showed Wideman talking to Flames head therapist Kent Kobelka on the bench.

Wideman’s situation does, however, call into question whether the NHL’s current protocol has enough teeth - specifically whether a player’s own assessment should hold any weight in the decision process.

Former Harvard football player and WWE wrestler Chris Nowinski, who now works with Boston University’s renowned CTE Center, said Wednesday that Wideman’s incident has “exposed that the NHL still has a long way to go on their understanding and management of concussions.”

“From an ethical perspective, none of the responsibility falls on Wideman. He suffered a brain injury while doing his job. Everybody needs to understand that a person who suffered a brain injury should never be expected to assess their own brain injury and make the best short and long-term decision for themselves. Never,” Nowinski said. “This is what medical personnel are for. If a player shows signs of concussion on the ice, it should be protocol that they cannot be allowed to refuse a concussion test.”

As currently written, the NHL’s protocol allows for that conversation between player and medical staff, which may ultimately sway the decision to be tested.