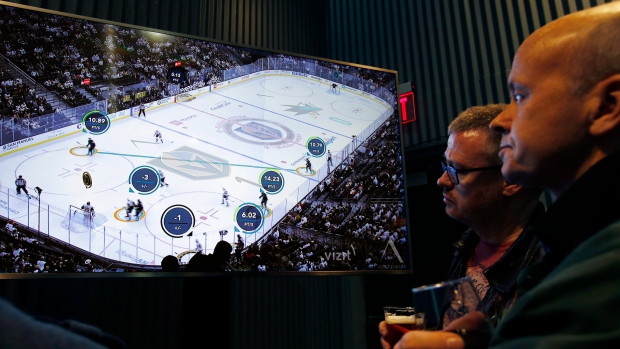 BOCA RATON, Fla. — The literal fabric of the game is changing just in time for the opening night of the Stanley Cup playoffs.

That is when the NHL will officially introduce a new puck, containing sensitive electronic equipment, for all games as part of the dawn of the player and puck tracking era.

With that comes a fear for the new puck’s integrity that will probably keep NHL executives awake at night.

Imagine a scenario in which the new puck explodes into three pieces after ricocheting off the crossbar on a scoring play in the Stanley Cup Final.

That’s exactly what happened with previous versions of the puck produced by a different manufacturer over the past number of years. But those fears have been unfounded with the latest iteration of the puck, according to testing conducted by a third party over the past months – information that was relayed to GMs in a presentation on Day 2 at their annual meetings here in South Florida.

“This was an important thing for us over the past months and years, making sure that the puck performs the way we expect it to in real-time situations,” Steve McArdle, the NHL’s executive vice-president of digital media and strategic planning, said during a media briefing on Tuesday.

The NHL tested the new puck – made of the same traditional rubber but assembled in pieces around the electronics – by firing it out of a “puck cannon” at speeds up to 170 mph and the puck showed no worse for wear.

“We haven’t been able to break this one yet,” said Keith Horstman, the NHL’s vice-president of information technology. “We shot it [at] 170 mph, 20 times, and it didn’t beak, it didn’t deform.

“We’ve been trying to get them to tell us what the break point is and they can’t get the gun [to fire] high enough.”

McArdle said: “No cracking, no breaking. The rubber held up. No damage to the puck. We hit the corner of the puck on the crossbar to test various points of potential failure.”

But the NHL’s independent testing can only reveal so much. It is not an apples-to-apples, game simulation-type test because there is no initial impact coming off a stick when it’s being shot out of a puck cannon.

For example, the impact off a player such as Shea Weber’s stick will be significant – and there is not extensive data from testing in-game scenarios.

The new puck has quietly been tested in nine NHL games in nine different buildings since Feb. 6. Testing will continue in 11 more contests up until March 28, including a March 19 game in Toronto that is planned to “showcase” the latest technology.

“Feedback has been minimal,” McArdle said. “We have not heard – in live-game situations – complaints about the performance of the puck. In fact, we’ve heard very little coming out of a lot of game experiences. So we’re happy about that.”

The new tracking puck may perform like a traditional puck, but does it look and feel like one of the old pucks?

The NHL put the pucks in the hands of top players around the league to use in practice. While there were no complaints, sources indicated Sidney Crosby was quick to notice that, for example, the edges of the puck felt different. There have also been comments about the weight and feel (hardness) of the puck from players.

Today’s players will be able to pick up on even a hint of a difference, just in the same way that players in the 1990s were able to correctly identify the pucks used for the old FoxTrax system in a blind test.

Major League Baseball was recently criticized for changing the composition and behaviour of the baseball, which may have been responsible for a surge in home runs. Will there be any similar, unintended consequence in the NHL?

“Our partners have been trying to make sure that this thing looks and feels and performs as close to the real thing we have today as possible,” McArdle said. “Key players have been playing with it during practices and the feedback has been minimal.”

The NHL’s new pucks are significantly more expensive to produce, believed to be around $100 per puck. The puck will transmit data 60 times per second, including location, speed, acceleration and deceleration and distance travelled. That information, along with tracking data gathered from tagging devices worn by players, will be displayed on broadcasts during playoffs.

The new pucks will activate as they are dropped by the on-ice officials and are expected to be deactivated when they are out of play or off the playing surface.

Even with the increased cost, the NHL says it has no plans to track down pucks that make their way out of play and into the hands of fans. They will, however, concentrate on “re-harvesting” pucks at the end of games and keep as many in circulation as possible.

Still, for all of the excitement about the introduction of player and puck tracking, the success of the system will come down to puck integrity.

Horstman pointed out that even a traditional puck made of vulcanized rubber has occasionally failed.

“It has happened in the past,” Horstman said.

It’s just that engineered technology does fail, sometimes when you least expect it and sometimes at the most inopportune moment. There is no room for error with this being rolled out at hockey’s most critical time.

What would happen if the new puck did fail?

“We would just treat it in the rule book as if a traditional puck failed,” said Kris King, NHL senior vice-president for hockey operations. “The play would be blown dead.”