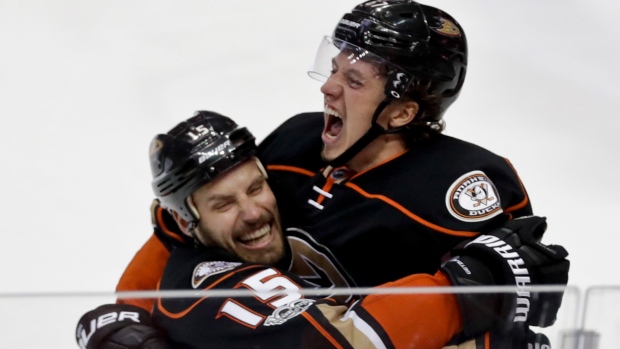 ANAHEIM, Calif. — The morning after, the bitter pill of Game 5 wasn’t any easier to swallow for the Edmonton Oilers.

They boarded their flight home with a turbulent mix of remorse – after the latest three-goal third period collapse in Stanley Cup playoff history – and the anger of a missed game-deciding call creating a nausea that would be tough for even the most veteran-laden team to stomach.

The young Oilers will be fighting for their playoff lives for the first time on Sunday night on home ice.

“It doesn’t really feel great right now, [but] I’ve seen resilience,” Oilers GM Peter Chiarelli said. “I know in two, three years, I’m going to look back on this [experience] and say ‘That was great for us.’ I know that. [I’m] 100 per cent certain. It’s just hard to make that determination now.”

Questions about Friday night’s controversial goaltender interference review dominated Chiarelli’s media availability – the beginning of a debate that will rage on well into the summer.

Chiarelli was measured and diplomatic in his response on Saturday, reminding that he was part of the group of general managers that voted to institute the coach’s challenge and video review for goaltender interference and offside rulings in 2015-16.

“I like the rule. I like the video review,” Chiarelli said. “It was hard to take last night … There is a frustration level building, but it’s really not because of anything the NHL Hockey Ops does, it’s not because of the process. It’s because the calls have gone against us. ”

Friday night’s goaltender interference review, deciding a pivotal playoff game, was the NHL’s train wreck waiting to happen. For the Oilers, it was the second controversial goal that went the other way in as many games in the second-round.

Could you imagine what the blowback would be if one of those calls were to decide the Stanley Cup?

No changes will come between now and the end of these playoffs, but video review looms among the biggest challenges facing the NHL heading into the offseason.

So, how can the NHL fix goaltender interference?

It can start by better defining goaltender interference. Chiarelli admitted Saturday that only a “general framework” exists.

“We have our own way of interpreting it, too,” Chiarelli said. “In our minds, we tweak it a little bit. If we look at last night, I see two points of interference. One was caused by our own player pushing their player in, the other was caused by their player in my mind. It was a difference in opinions.”

Chiarelli said the definition in itself is tough to establish.

Once clearer criteria for interference are established, Chiarelli said the next step is to discuss the referee’s role in determining the call.

“In the playoffs, we’re including the series supervisor, the ref and Hockey Ops [in the discussion],” Chiarelli said. “There’s ways to define what the vote is in that discussion. There are ways to make it better.”

That is the NHL’s biggest battleground. When video review was instituted, director of officiating Stephen Walkom and the NHL’s Officials Association fought to keep the final call in the hands of the on-ice official.

When a referee puts the headset on to review the play on an iPad, the conversation with senior vice presidents of hockey ops Kris King, Mike Murphy or Colin Campbell is to guide the referee to the “right call,” even if it means overturning the original one. The SVPs in the Situation Room in Toronto walk the referee through the different angles and point out anything they can see on the larger screen that the referee may be missing.

Ultimately, the Situation Room does not steer a referee one way or the other. The final call remains that of the referee on the ice – whether it’s a coach’s challenge or an automatic review in the final minute of regulation or overtime.

Chiarelli hinted a fight to wrestle control of the final say – or “vote” as he phrased it – away from the referees and toward the Situation Room is on the horizon.

The simple reason for it is that there are too many cooks in the kitchen.

The NHL has 33 full-time referees and nine more contracted to the AHL on a part-time basis. We look for black and white answers from referees who wear black and white stripes, but hockey – like life – is full of grey matter. Even if goaltender interference is more clearly defined, each one of those 42 referees will have their own interpretation on any given night.

It is easier to have a more consistent application if only three or five members of the NHL’s Hockey Operations department are making that judgment call from Toronto.

The problem is the NHL’s Officials Association would likely view losing the power to make the call as a slippery slope. It is an uneasy situation for all involved.

It is nonetheless a discussion that needs to be had, because the NHL’s current system is broken. Even Ducks coach Randy Carlyle said Friday night he was “just praying” his definition of goaltender interference was the same as the referee with the headset on.

Meanwhile, the NHL has to be praying video review doesn’t rear its ugly head again in a game (or Cup) deciding way in these playoffs, while the Oilers attempt to pick up the pieces.

“It was a tough loss to take but these series, anything can happen, as you’ve seen,” Chiarelli said. “We just have to get back on our horse.”