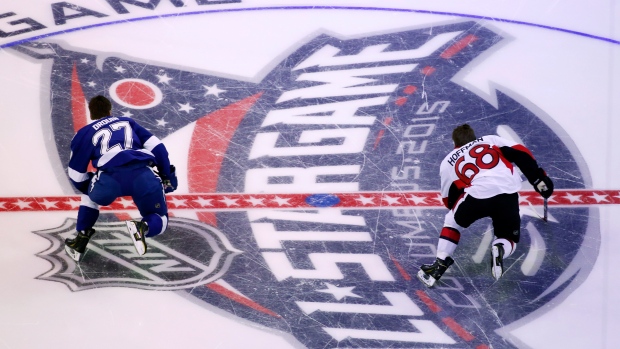 The NHL and Sportvision announced on Saturday a partnership to revolutionize the collection of data in the game of hockey.

With tracking chips implanted into pucks and the back of players' jerseys, Sportvision will be able to gather previously unattainable data from all over the ice by using a series of infrared cameras placed around the arena that will read the chips. The location of each player and the puck, as well as the speed of the puck and each player, are among the data that can be collected at a rate of 30 times per second.

"Hockey is an incredibly hard sport to follow," said Hank Adams, the CEO of Sportvision. "It is very dynamic. It is very fast. Players change shifts dynamically during the game. You have guys coming on and off the ice, and fans at home can't see that. With this technology, we can very simply tell fans who has come on, who has come off, how long their shift was. It can be very simple storylines like that, or very complex storylines; when you collect this data over a long period of time, you can really start helping fans understand the game better and maybe even help coaches understand the game better. What happens with the penalty kill against a power play in certain formations. We can start mining this very deep data."

This is Sportvision's first venture into hockey. The company is responsible for the virtual first down line in the NFL and NCAA and the virtual strike zone utilized in MLB broadcasts.

There is hope that using this technology will improve the on-TV product for viewers.

"We're excited about trying to bring that in-arena experience into the living room," said NHLPA special assistant to the executive director, Mathieu Schneider. "That's something that we've talked about for years and years -- that the experience at the rink doesn't translate to home. As technology gets better, we're able to see more of that."

Saturday night's usage of the technology during the All-Star Skills Competition was just a test run. Sportvision will meet again with the NHL and NHLPA to discuss the next steps forward.

"While we're excited about doing this test, we're not exactly sure where this will all take us," said Gary Bettman, NHL commissioner. "This is, if I can coin a phrase, in the embryonic stages of a work in progress, but ultimately we are hoping to deliver the kind of data that will create insights and tell stories that avid and casual hockey fans will enjoy. In short, we are attempting to embark upon a journey that hopefully will enable us to create and then maintain a digital record of everything in our game and compile a complete digital history."