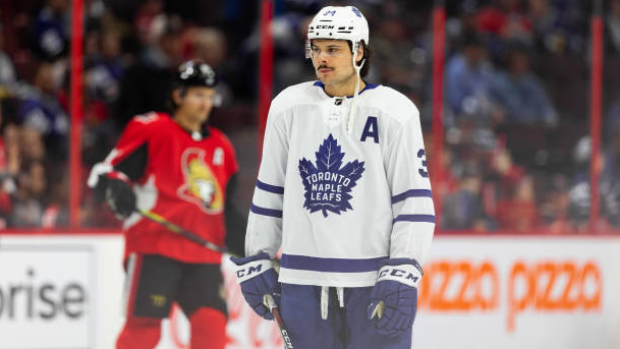 The National Hockey League is keeping track of the local government restrictions impacting each of its 31 clubs by way of a master chart.

It’s one that deputy commissioner Bill Daly says is “dynamic and changes virtually every day.”

The NHL’s two Ontario-based teams – the Toronto Maple Leafs and Ottawa Senators – moved into the clear on the league’s chart on Friday, when Minister of Heritage, Sport, Tourism and Culture Industries Lisa MacLeod announced that all professional teams in the province are permitted to reopen their respective practice facilities.

But that doesn’t change anything for the Leafs, Sens or the NHL as a whole because the league has not allowed teams to progress to Phase 2 of its return-to-play protocol, which calls for teams to open facilities for players to train in small groups.

The NHL still hopes to move to Phase 2 in the “mid-to-later portion of May,” as stated to teams in a league-wide memo last week, but that will be subject to “potential competitive concerns between disparately situation markets.”

In other words, the NHL doesn’t plan to take the next step until a fair majority of its clubs will be permitted to open their facilities to avoid a competitive imbalance.

Ontario’s move on Friday did not tip the scales.

“Still not an acceptable mass,” Daly wrote in an email. “But moving in the right direction.”

According to data compiled by TSN from local and international media reporting, approximately half of the NHL’s markets would have been permitted to open team facilities as part of Phase 2 on Friday.

That number could shift to approximately 22 clubs by May 15, when local restrictions are scheduled to be eased in Arizona, California, Minnesota and Nevada.

Daly said the NHL has not determined yet what would constitute that “acceptable mass” and it likely won’t be a set number. It will depend on “direct communications with local health authorities.”

Daly said that could include “alternative plans” being made available to teams located in markets that are not in position to open.

Indeed, it may be a while longer before all markets are allowed to open practice facilities. Quebec has limited indoor and outdoor gatherings in Montreal to no more than two people and those restrictions are scheduled to be in place until May 25.

The league’s chart is nuanced and complicated. For instance, Calgary mayor Naheed Nenshi has called for the same level and stiff restrictions province-wide, even though his city accounts for more than 75 per cent of all of Alberta's cases of COVID-19.

The Oilers, meanwhile, continue to engage with the government on both the hopes of opening their facility for Phase 2 and hosting games in a potential season restart as a hub city.

“We continue to have very positive and collaborative conversations with the Alberta government, and they are open to working with us to allow the return of NHL players and staff to Edmonton as a part of Phase II, following provincial health protocols,” Oilers Entertainment Group spokesman Tim Shipton said on Friday.

Different teams in the same state or province also face different restrictions. For instance, New York governor Andrew Cuomo said he planned to lessen restrictions on upstate business – where the Buffalo Sabres are based – before doing so in the New York City area, where the Rangers and Islanders call home.

The Tampa Bay Lightning likely would have been permitted to open their practice facility on Friday, but across Alligator Alley, the Panthers are facing tougher restrictions in Broward County. Also, Philadelphia has extended stay-at-home restrictions through June 4, but the Flyers’ practice facility is located across the Delaware River in New Jersey, where different restrictions may be in place.​​

The NHL has also not yet outlined for teams the specifics that would be required to safely enter Phase 2. The NBA said no more than four players may be in a team’s facility at one time, players must be kept 12 feet apart for the voluntary workouts, and no head coach or front office member may be present, among other details. Some teams, like the Dallas Mavericks, play in a city that would allow the facility to open, but owner Mark Cuban said they would not gather until everyone could be tested.

The NHL has not yet secured testing for players and staff members, according to sources, and it is unclear whether the league would require testing to first reopen facilities.

To date, the NHL has also not formally instructed players to travel to their club cities, where significant border restrictions – between both Canada and the United States, as well for players at home in Europe – may delay or even make regrouping impossible for now.

Until then, the NHL will continue to monitor and update its master chart – which is trending in the right direction – with the hopes of moving forward soon.